Kirk: Everton goalkeeper MacIver should be England's number one
Match

Kirk: Everton goalkeeper MacIver should be England's number one 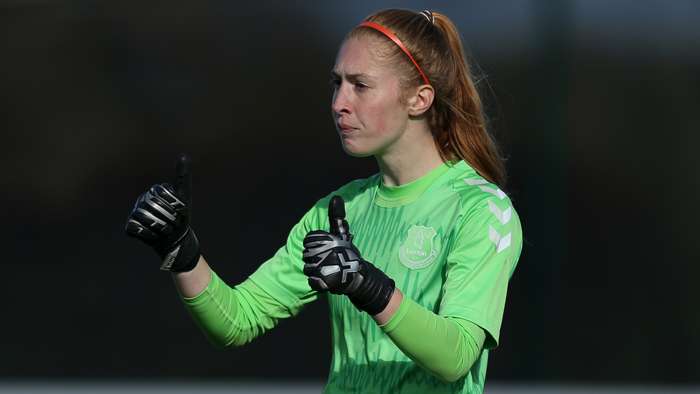 However, it was MacIver who was named player of the match at Wembley Stadium, despite the result.

The 22-year-old has been called up to recent England camps under Phil Neville,but has yet to make her first senior appearance, with Covid-19 restricting the Lionesses to just three games in 2020.Kirk, though, believes that she should be first choice for her country.

"Outstanding. From start to finish, outstanding," Kirk said when asked about MacIver's performance.

"She took knocks, she did everything she could to keep the ball out of the back of the net. Sometimes It wasn't pretty. Sometimes it was a punch, it was a slap at times. I think there was one cross that she was at full stretch, and she just had to get something on it.

"But I thought she was outstanding today and very much showed that she's, for me, England's number one.

"She went through a lot throughout that 120 minutes. She took knocks, she made great saves, she was on end of the wrath of me, I think, when she played long when we needed to keep the ball. She went through about everything today.

"She showed that she's a top goalkeeper. She showed that she's going to continue to develop her game. She deserves the player of the match award and she'll learn a lot from that. That will be a great memory for her, a great experience for her to go on and achieve big things in the game."

MacIver made one particularly important save when the score was just 1-0 to City -minutes before Valerie Gauvin's equaliser in normal time - by throwing herself instinctively in the path of Chloe Kelly's goalbound shot from close range.

Then, as the 90 minutes came to a close and City were pushing for a late winner, MacIver again pulled out a world-class save when she tipped Steph Houghton's header onto the post.

Unfortunately, in the end, it wasn't enough to help Everton win their first major trophy for 10 years, though, as City scored twice in extra time to retain their title.

"They gaveabsolutely everything they had in the tank. I'm very, very proud of them," Kirk said.

"Obviously there has to be a loser. You never want to be that loser. But, in terms of what we did on the pitch, and what we asked of them, I'm immensely proud of the players and staff and the club, in terms of support we've had.