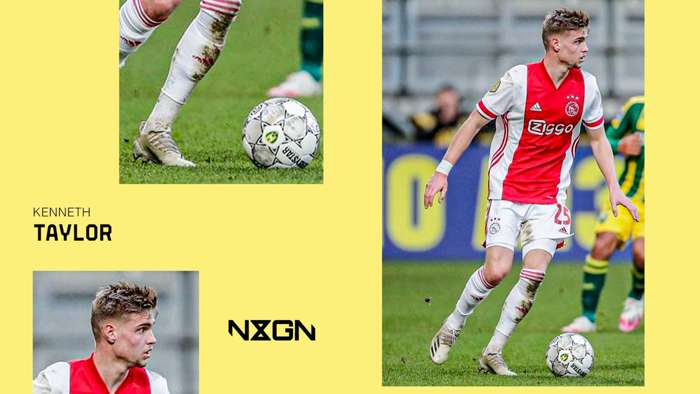 It is fair to say that the last seven days at Ajax will not be remembered fondly by those at the Johan Cruyff ArenA.

The long-term success of the Dutch giants wasalso hit hard, asthe news that 19-year-old striking sensation Brian Brobbey would be leaving the club this summer followed hot on the heels of 16-year-old Julian Rijkhoff - dubbed by some as 'the Dutch Lewandowski' - confirming his depature for Borussia Dortmund.

Though the loss of such prodigious attacking talents will undoubtedly have disappointed the Eredivisie outfit, Ajax would not be Ajax if they did not have a wealth of other academy graduates who were being tipped for the top.

Ryan Gravenberch, Devyne Rensch, Jurrien Timber and Lassina Traore are all already fixtures in Ten Hag's seniorsquad, while Naci Unuvar and Sontje Hansen are among those expected to make the leap in the next 12-18 months.

One player, meanwhile, who is currently caught between the two camps is midfielder Kenneth Taylor, who has made his first twofirst-team appearances earlier inthe current campaign having been with the club since the age of eight.

Though officially part of the squad that trains under Ten Hag every day, Taylor remains a key player in the Jong Ajax side that compete in the Dutch second tier, for whom he has scored four goals and laid on four assists so far this term.

Those returns are impressive for a player who predominantly plays as a defensive midfielder, though his attacking instincts should not come as too much of a surprise after he was initially scouted whileplaying as a striker for local club De Foresters, who are situated around five kilometres from his birthplace,Alkmaar.

Ajax's academy coachesfelt he possessed the attributes to play further back, and after initially training Taylor up to play in defence, he has eventually transitioned into a role shielding the backline thanks to his excellent positional awareness and supreme passing ability.

Having signed a new four-year contract with his boyhood club in September, there is no danger of Taylor following the likes of Brobbey and Rijkhoff out of the club for free, though he has been compared to another recently-departed academy graduate.

The 18-year-old's blonde hair combined with his general position on the pitch has seen Ajax youth coach Winston Bogarde routinelyrefer to Taylor as 'the new Donny van de Beek', despite their obvious differences in their overall game, with Van de Beek generally far more free to get forward and contribute to attacking moves.

Coincidentally, the day that Taylor signed his new deal proved to be Van de Beek's last with the club, as the Netherlands internationalcompleted his £35 million ($46m) move to Manchester United.To celebrate both momentous occasions, the pair went out to dinner together before heading on their own separate paths.

“He is a kind of brother of mine and always gives me good advice," Taylor said of the 23-year-old."He has already been through it all and says he needed to have patience.”

Patience remains the name of the game for Taylor, who has been destined to make the grade under Ten Hag ever since impressing him during a pre-season training camp in 2019.

He was invited to join the senior squad having earlier that year captained Ajax's Under-19s to the domestic double as well asthe Netherlands to victory at the U17 European Championships in Ireland.

"He is very good at positional playing and has an excellent mentality," Peter van den Veen, the Oranje's coach at that tournament, told the KNVB podcast, 'FutureWave', of the two-footed youngster who made his Jong Ajax debut at the age of 16.

“He keeps going where others would stop and is just genuinely a good guy. Others accept instructions from him when he tells them."

That aforementioned winning mentality is not restricted to the pitch, either, as explained by Taylor's best friend, and current Wolves defender, Ki-Jana Hoever.

"We talk to each other every day," he told same podcast."We often play FIFA and he absolutely cannot stand losing. When he does, hethrows his controller!"

On the field, Taylor has his emotions totally under control as he continues on the path towards his main goals of locking down a regular spot in the Ajax first-team and becoming a full Netherlands international.

He has already seen Gravenberch, who was born on the exact same day back in 2002, be called up the senior international squad, and Taylor is keen to one day join him.

If he does so, then he may get the chance to play alongside the man he cites as the example he wishes to follow: Georginio Wijnaldum.

"He is such an all-rounder," Taylor said of the Liverpool midfielder on the FutureWave podcast. "In my opinion he can do anything.

"He is my example and I believe in my chances of playing for an absolutely top club like him."

Having been likened to Toni Kroos for his ability in possession, that ambition does not seem too far-fetched for Taylor, with his first steps into the Ajax side having illisutrated that he will be able to make a comfortable transition to the first-team in the coming months.