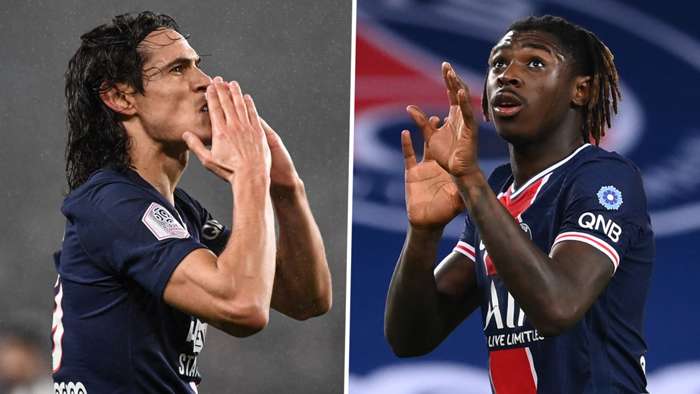 Moise Kean has earned a comparison to current Manchester United star and former Paris Saint-Germain frontman Edinson Cavani, with Eric Rabesandratana disappointed that the Ligue 1 champions have no purchase option on the Everton loanee.

Despite his difficulties on Merseyside, Kean’s stock remains high andPSG presented him with another prominent stage on which to perform. They have seen the former Juventus youngster rewardtheir faith with five goals in seven appearances.

With Kean eager to prove himself in France, his tireless running and impressive end product has not gone unnoticed.

Those qualities have seen him likened to a proven performer who departed Parc des Princes just prior to his arrival, with Rabesandratana seeing similarities between a new recruit and the Uruguayan frontman who plundered 200 goals in 301 outings for PSG.

“When the ball is lost, he immediately starts to defend,” Rabesandratana told France Bleu Paris of a player who hobbled off injured in the3-0 win over Rennes on Saturday.

“He reminds me a bit of Edinson Cavani in his mentality and effort. I hope he scores as many goals as Cavani.

“We’ll be watching the next matches to see if he keeps that consistency, which is the most important thing at the top level.

“Kean will establish natural competition with Mauro Icardi, who will have to make an effort. That is good for the team. Unfortunately, we have no option to buy him at the end of the loan.”

Everton only sanctioned a season-long loan for Kean when allowing him to head out of Carlo Ancelotti’s squad. The Toffees do not appear ready to give up on a hot prospect just yet, but it may be that their hand is forced by a player eager to forget his troubles in the Premier League.

Kean told Rai Sport when heading for Paris: “I am not particularly upset to have left English football, even if the banner from the Everton fans really moved me, as I wasn't expecting it.