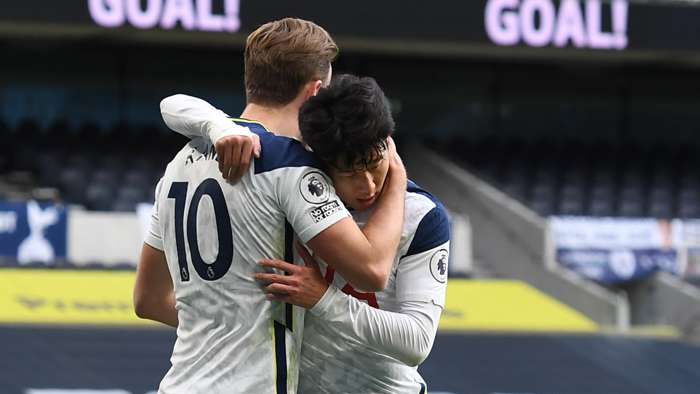 The pair have now combined to score 13 Premier League goals so far this season – equalling a record which had stood for more than 25 years. Alan Shearer and Chris Sutton were the only previous pair to assist each other so many times in a season, during Blackburn’s title-winning campaign in 1994-95.

The goal was also Son’s 100th in all competitions for Spurs, and his 12th in 16 league games this season. Only Kane has scored more since he arrived in north London with 169, and nine of those 12 so far this year have been assisted by Kane.

Kane brought up a minor personal milestone of his own with his opening goal from the spot. It was his 10th league goal of the season which, when added to his 10 assists at that point, took him level with the number of goal contributions he managed in the whole of 2019-20. His assist for Son took him past that benchmark soon after.

It also meant Kane has now scored against all 30 of the teams he has faced in the Premier League.

"With Kane and Son, what Mourinho has done has been incredible,' Defoe said on the Mennie Talks Podcast.

"Those two are the best partnership in world football at the minute. The hardest thing that you can do at the top level is to be consistent, so for those two to show that consistency, for me is unbelievable.

“Son is dynamic, so he runs in behind. He gets the ball and he is direct, he beats people.”

Jose Mourinho has said he expected Son to sign a new contract at some point as he believes the South Korean wants to spend the rest of his career at Spurs.

He said: “I just trust Sonny and MrDaniel Levy Tottenham chairman, I know both want to stay, if possible, for life and until the end of their careers, so I see Son signing a new contract here.