Kalvin Phillips: 'The Yorkshire Pirlo' that England can thank Bielsa for

Kalvin Phillips: 'The Yorkshire Pirlo' that England can thank Bielsa for 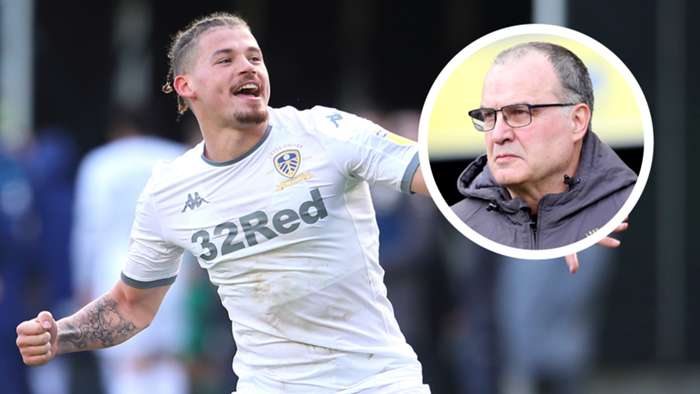 At the end of the 2017-18 season, Leeds United had two homegrown midfielders who were beginning to hold down regular places in the first team.

The other was Kalvin Phillips, a frustratingly inconsistent figure who, though having provided a handful of goals, was regarded by a number of fans as expendable should the Elland Road outfit need to raise funds.

In the end, it was Vieira who departed the club, swapping West Yorkshire for Liguria after joining Sampdoria in a deal worth €8 million (£7m/$9m). Phillips, meanwhile, was retained to form part of new manager Marcelo Bielsa’s first squad in English football.

Leedswere promoted back toPremier League from the Championship last seasonand now Phillips has becomethe first Leeds player to earn a call-up to the senior England squad since Alan Smith in 2004.

That meteoric rise islargely down to the work Bielsa has done to mould the 24-year-old from being a box-to-box player to the perfect modern-day defensive midfielder who is also capable of dropping in and excelling at centre-back.

Dubbed ‘The Yorkshire Pirlo’ by Leeds supporters, the change of role has turned Phillips’ career on its head.

“When the manager first came in, we had a meeting where he went through the names of each player telling us which number we’d be wearing,” Phillips told The Athletic in a recent interview.

“Obviously, I thought I was going to be No.8 or something like that, but when he got to me he said No.4. It surprised me because it hadn’t crossed my mind that I might be playing there.

“After that meeting, he told me he wanted me to be a defensive midfielder and that I’d have to get better defensively and in the air. Up until then, I probably thought of myself as box-to-box.

"I wasn’t a defender and I didn’t think of myself as one. I’d scored a few goals in the previous season. So, when I first got told to play defensive midfield I thought, ‘What’s going on here then?'”

If Phillips was confused by his change in position, he has barely shown it over the past two y ears.

Bielsa twice substituted the midfielder midway through the first half of games during his opening few weeks in charge, but both times insisted that Phillips just needed time to fully understand what was being required of him.

By mid-season, he was up to speed as Leeds closed in on promotion, only to agonisingly miss out in the final weeks of the campaign before losing in the semi-finals of the play-offs to Derby County.

Leeds’ failure left Phillips with a dilemma. Understandably, given his performances, there was interest from Premier League clubs, most notably Aston Villa, who were willing to pay in the region of £30m ($37m) to sign him in the summer of 2019.

Phillips, though, chose to remain at Elland Road and signed a new five-year contract.

“To be honest, I was in a situation where I didn’t know what to do,” he said of the potential transfer. “I was basically on the verge of leaving. I was on the verge of saying I wanted to leave, but at the same time I didn’t want to say it.

“I came in one day and Victor Orta, Leeds’ director of football said to me, ‘Listen, if you want to leave, then just let me know. If you want to leave, tell me right now and I’ll sell you.' I said, ‘I don’t know.' So, Victor said, ‘If you don’tknow, then I’m not selling you’.”

Orta’s intervention has paid dividends for Leeds, with Phillips growing in stature throughout Bielsa’s second season in charge.

Despite missing nine games of the season, he still ranked among the top 10 midfielders for attempted passes in the Championship with 2027, of which 82 per cent found their intended target.

He averaged 1.4 interceptions a game while winning 62% of his tackles and 54% of his duels over the course of the campaign. No midfielder in the second tier of English football can claim to be better than him across those categories.

He hasnot lost his touch in front of goal either, with his set-piece ability on show when he curled in a 25-yard free-kick against Blackburn Rovers in a crucial win towards the end of the campaign.

Such displays meant that England boss Gareth Southgate, who lives in nearby Harrogate, became something of a regular at Elland Road as the season wore on before coronavirus stopped him from attending games in March.

The Three Lions are not blessed with defensive midfield depth as they look forward to the rearranged European Championships. Declan Rice is arguably the man in possession of the shirt right now, while both Harry Winks and Jordan Henderson have experience of playing the role.

But while those players are forced to switch between positions, Phillips has been able to perfect playing in one of the most challenging positions in football under the tutelage of one of the game’s outstanding tactical coaches.

“I don't find him scary– not anymore!" Phillips told BBC Sport of Bielsa earlier in the year. "When he laughs and when he is smiling, it makes everyone happy."

After Leeds’ promotion to the top flight was confirmed in July, Bielsa travelled to Elland Road to celebrate with his squad. Film crews inside the stadium caught the moment he and Phillips spotted one another and shared a warm embrace.

Bielsa pulled away before telling his young charge he was “the best”, repeating the sentiment twice more before other players came in for a hug from 'El Loco'.