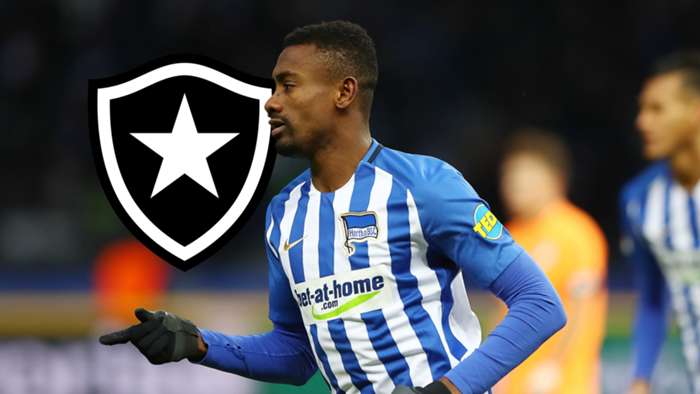 The coronavirus pandemic – and resulting financial catastrophefor global football – may have slowed down the number of eye-catching transfers in the market, but it has not succeeded in bringing them to a halt altogether in South America.

De Rossi played seven matches for Boca Juniors before deciding to retire.Adebayor'sadventure at Paraguayan sideOlimpiawas over after four games – and onememorabeCopaLibertadoresred card – when a mutual contractrecissionwas announced due to the pandemic.

Honda,however, is still there. His employersBotafogohave now struck again, bringing in ex-Chelsea andHerthaBerlin favourite SalomonKalouin a move that caught just about everyone offguard.

Kalou, 34, announced his imminent arrival in Rio de Janeiro last weekfollowing six seasons withHertha, the last of which saw him fall out of the Bundesliga club's first-team plans and restricted to just five league appearances.

After negotiating with ex-Nigeria international Jon ObiMikelearlier in 2020 and moving mountains to convinceYayaToureto move – only for the midfielder to commit himself to rivalsVascoshould a certain presidential candidate win elections –Botafogohave finally captured a second marquee name to sit alongside Honda's on the team-sheet.

Such an extravagant transfer is curious to say the least, considering that just two months ago the Rio side appeared in dire financial straits. A total of 45 club employees were laid off to cut costs during the coronavirus pandemic, while players and staff alike were left waiting on back salary payments that carried several months' delay.

The club also had no qualms in unilaterally rescinding the contract of JoelCarli, the 33-year-old Argentine defender who represented them for just short of four years and is now pursuing his grievances through the courts.

“I'd like to thank the fans for their unconditional support, my team-mates and ex-team-mates and all theBotafogostaff during this transition period,”Carliexplained on Instagram. I was given no choice. I tried everything to stay.”

Sport in Brazilresumedin the middle of June, cajoled back into regular service byhard-linepresidentJairBolsonaroand under fierce protest from the players themselves.

Just days prior to the scheduled resumption of activities in Rio'sCariocaState Championship,Botafogoreported 17 cases of coronavirus in their ranks, including five players, and subsequently marked their clash againstFluminensein July with a shared protest; Honda and Flu legend Fred walking out together with a banner asking for authorities to “respect our history.”

Kalou, then, arrives in Rio amid the most abnormal of atmospheres. The likes of Honda andAdebayorwere feted by thousands of fans upon joining their new clubs; the Ivorian can expect a rather more muted welcome.