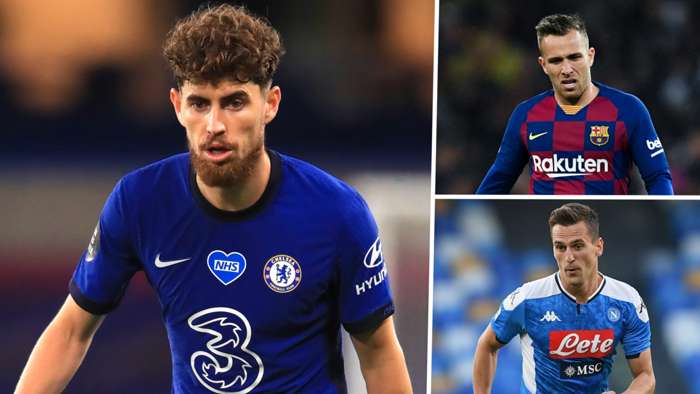 It hasbeen a strange season for Juventus.

The conclusion of Juve's Champions League campaign will be crucial in that regard, but it isnot as if Sarri has failed to do any good work during his first season in Turin.

Cristiano Ronaldo has scored more goals than any Juventus player since 1952, Paulo Dybala has become a key player again after being pushed towards the exit door under Massimiliano Allegri, while Matthijs de Ligt has recovered from a difficult start to his Serie A career to prove himself one of the best defenders in the league.

Sarri has played a significant role in all three success stories.

However, it isclear that several players have struggled with his possession-obsessed style of play, meaning there could well be plenty of movement at Juventus during the upcoming transfer window...

As soon as Sarri was confirmed as Juve's new coach last summer, Jorginho was linked with a move to Turin. The Brazil-born Italy international was the key cog in the Napoli side that perhaps best showcased Sarri's brand of football.

A year ago, Jorginho was happy to stay at Stamford Bridge. Now, though, things have changed. He has been deemed surplus to requirements by manager Frank Lampard, thanks in no small part to the emergence of teenage sensation Billy Gilmour.

Chelsea could certainly do with bringing in some cash, given they are in the midst of a summer spending spree, but they will not allow Jorginho to leave on the cheap. Sarri will push hard for a reunion, though.

Rodrigo Bentancur has done a decent job in front of the back four in 2019-20 but with Miralem Pjanic having departed for Barcelona, Juve could do with a midfield metronome that perfectly understands 'Sarriball'.

Pjanic, of course, was effectively swapped with Arthur, who is likely to slot in on the left-hand side of a midfield three.

The Brazilian can be maddeningly inconsistent but, with his excellent passing skills, he should certainly be suited to Sarri's style of play.

Of course, Juve have also already snapped up another player, Dejan Kulusevski, who was bought from Atalanta in January but will only arrive in Turin in the off-season after spending the remainder of the 2019-20 campaign at Parma.

The Old Lady has long been crying out for a dangerous runner like the Swede, who is able to break the lines in midfield with his pace and fantastic dribbling skills.

Juve could also do with a new left-back, given Alex Sandro's degeneration over the past couple of seasons, and Sarri would also like to return to Chelsea for Emerson Palmieri.

Like Jorginho, the Italy international has fallen out of favour with Lampard and is certainly available for transfer. The one complication in this instance, though, is Inter, as Antonio Conte is also interested in the 25-year-old.

Finally, Juve will also be looking to sign a No.9, as Gonzalo Higuain has endured a difficult campaign, on and off the field, and appears likely to return to his native Argentina.

Given he ispresently the only orthodox striker on Juve's books, the Italian champions are particularly keen on another player with which Sarri is very familiar, Arkadiusz Milik.

The Poland internationalhas already made it clear that he has no intention of signing a new contract at Napoli, who are now merely trying to get as much money as possible for the former Ajax attacker.

Juve's unprecedented run of titles has been founded upon their incredible defence. However, the Bianconeri have conceded 38 goalsthis season– their highest tally since the 2010-11 campaign, when they finished seventh.

Consequently, some changes are expected at the back.

Veteran duo Giorgio Chiellini and Gianluigi Buffon have both signed extensions until 2021 but it would be a massive surprise if Daniele Rugani is still at the club next season.

The centre-back first came to prominence under Sarri during their time together at Empoli, but the 25-year-old has never truly convinced in Turin and is likely to move on this summer, perhaps to the Premier League.

Mattia De Sciglio is a useful squad player because of his versatility but the full-back could also depart, possibly as a makeweight in a deal to sign one of Juve's top transfer targets.

In midfield, Aaron Ramsey has had a frustrating first season in Italy, with injuries once again holding the former Arsenal man back.

The Wales starstill has plenty to offer, but do notbe surprised if Juve opt to make some money on a player that arrived on a free transfer last summer.

Adrien Rabiot is in a very similar position to Ramsey, thoughthe Frenchman could be retained given he has shownflashes of what he can do towards the tail end of the season. A decent offer from the Premier League would be given serious consideration, though.

Up front, Higuain is, as already mentioned, almost certain to leave and Federico Bernardeschi could also be shown the door.

Much like De Sciglio, Bernardeschi is a fine utility player but if he is to belatedly live up to his obvious potential, he needs to be playing regular football.

The former Fiorentina winger is 26 now and a transfer appears the best solution for everybody involved. Barcelona have been previously linked with Bernardeschi, but he could end up being sent to Napoli in exchange for Milik.

Obviously, much will depend on whether Sarri holds on to his job.

The way in which Juve effectively fell over the finishing line in the Serie A title race has done little to silence his critics, and failure to get past Lyon in the last 16 of the Champions League could signal the end of his tenure.

However, Fabio Paratici insists that Sarri's job is safe, so we willassume that the Bianconeri will once again play his beloved 4-3-3 formation again in 2020-21.

If an agreement can be reached with Chelsea for Jorginho, he will obviously slot straight into the middle of the park alongside two new recruits: Kulusevski and Arthur.

Kulusevski could also be deployed on the right wing, of course, with Dybala operating as a 'false nine', but Milik will be expecting to lead the attack should he arrive from Napoli.