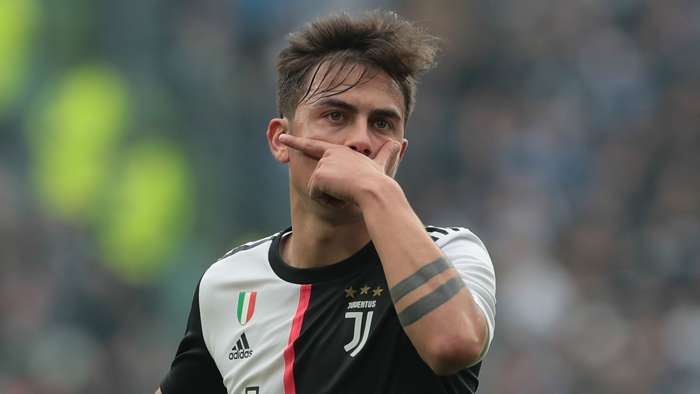 Juventus are sweating over the fitness of Paulo Dybala after a scan on the Argentine forward revealed athigh muscle strain.

On Monday, Juve released a statement confirming he had undergone tests which had revealed "an elongation of the rectus femoral muscle of the left thigh", and he will now have his condition monitored on a daily basis.

While Maurizio Sarri's side have the league title wrapped up with two games to spare, they would be loathe to lose one of their star players ahead of the return of the Champions League.

Juve host Ligue 1 side Lyon on August 7 needing to overturn a 1-0 first-leg deficit in order to reach the knockout tournament in Portugal. If they do turn the tie around, they would face one of Manchester City or Real Madrid in the quarter-final.

Juventus have been eliminated at the quarter-final stage of the Champions League in each of the last two seasons, having reached the final in two of the threeyears prior.

Right-back Danilo, who joined the Old Lady from City at the beginning of the season, also went off injured against Sampdoria but tests revealed no serious injury and he is expected to be available for Lyon.

Dybala’s importance to Juventus has been underlined recently, with chief football officer Fabio Paratici revealing the club are in advanced talks to extend the forward’s contract .

"We often speak with his entourage and we are moving forward, despite all the difficulties related to the commitments and the movement due to the games that are played every three days," Paratici told Sky Sport Italia."Even in this period, we are talking quite frequently and we are well advanced."

Dybala has scored 17 goals and registered 14 assists in all competitions this season, including a recent run which saw him find the net in five consecutive Serie A games.