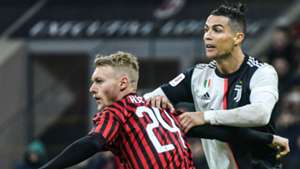 Juventus' Coppa Italia semi-final second leg with AC Milan on Wednesday night has been postponed due to the ongoing coronavirus crisis in Italy.

The sides are level at 1-1 following the first leg, when Cristiano Ronaldo buried a controversial late penalty to cancel out Ante Rebic's opener.

A meeting was held with Juventus representatives, the Mayor of Turin Chiara Appendino and prefect Claudio Paolomba.

Juve's head of communications, Claudio Albanese, had already made clear: "Juventus respects any decision taken by the authorities, public health is also a priority good for society."

The virus has caused chaos with the Italian football calendar, with a number of Serie A fixtures postponed in recent weeks.

Juve's top-of-the-table clash with Inter last weekend was one of five games postponed, having previously been earmarked to be played behind closed doors.

Udinese vs Fiorentina, Milan vs Genoa, Parma vs SPAL and Sassuolo vs Brescia were the four other fixtures postponed that weekend, and reorganised for May 13.

Juve's game with Inter was reportedly set to be played on Monday, March 9 in order to ease potential fixture congestion later in the season.

Inter were reportedly unhappy with this resolution. President Steven Zhang called Serie A president Paolo Dal Pino "the biggest and darkest clown I have ever seen" over his handling of the fixture chaos.

A government decree has suspended all sporting events in regions affected by the coronavirus until March 8.

That has meant Juve's game with Bologna will not go ahead. Atalanta vs Lazio, Inter vs Sassuolo, and Hellas Verona vs Napoli are the other games postponed this weekend.

A meeting is due to be held on Wednesday, March 4 with Serie A chiefs and representatives from clubs to decide the course of action over the remainder of the season.

An outbreak of a deadly coronavirus in the city of Wuhan in late 2019 placed large parts of China on lockdown and the rest of the world on high alert.

Despite taking measures in an attempt to contain the spread of the virus, it has spread throughout China and across the world, including the United Kingdom, the United States, Australia and parts of Europe.

Travel restrictions are in effect across China, particularly so in the region most affected, with health officials advising people to avoid travel into or out of seriously affected countries.