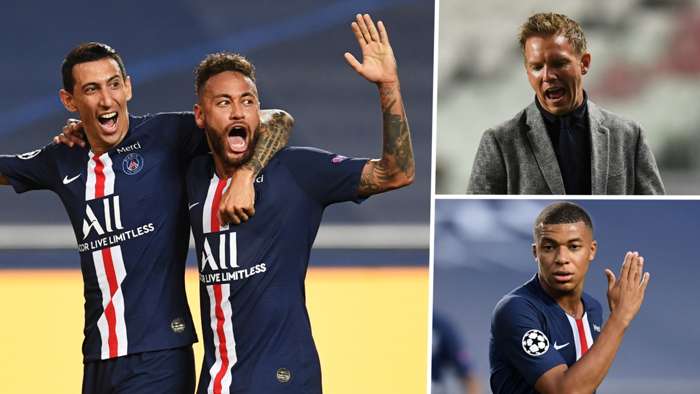 The pressure was again all on Paris Saint-Germain. Only this time they didn't feel it at all.

He looked more like DJ rocking up to a club than a footballer preparing for the biggest game in his team's history.

The message was clear: PSG were here to enjoy the game, not bottle it.

From the very first minute, they played with an intensity and belief that appeared to take their opponents completely by surprise.

In his pre-match press conference, Julien Nageslmann warned his players: "Kylian Mbappe and Neymar are top players. We need to stop them as a team.

"It will be difficult. We have to avoid losing the ball, because PSG are very strong on the counterattack, but we'll try to take the game by the scruff of the neck."

They did nothing of the sort. PSG ran right at Leipzig when they had the ball, and then swarmed them when they lost it.

Consequently, it never took the French champions long to recover possession, and they repeatedly did so in dangerous areas.

Even Neymar, a player for so longer questioned over his defensive contribution, hassled and harried at every opportunity.

PSG boss Thomas Tuchel described him beforehand as "a leader", "a different kind of leader" but a leader nonetheless. The former Barcelona man backed up his coach's claim.

Like all of his team-mates, Neymar knew that a last-four meeting with Leipzig represented a gilt-edged opportunity for PSG to reach their first-ever final.

To their credit, they never looked like passing it up.

Neymar played a key role: he won the free-kick from which Marquinhos headed home the opener just 13 minutes in before creating the second for Angel Di Maria with a gorgeous back-flick.

However, the latter was the star of the show for PSG.

Much of the build-up had been dominated by Kylian Mbappe's return to full fitness for the semi-final, having made a game-changing impact off the bench in the dramatic comeback against Atalanta in the quarters.

As it transpired, though, Di Maria's availability was of greater significance.

With the veteran Argentine back in the starting line-up in place of Pablo Sarabia, PSG looked far more balanced in attack and, consequently, far more threatening.

Mbappe's pace bailed them out against a tiring Atalanta but such last-gasp heroics weren't required here. With Di Maria on the right side of the attack, PSG were dominant and decisive from the first whistle.

He racked up two assists either side of his coolly taken goal, first crossing for an unmarked Marquinhos to open the scoring, and then Juan Bernat to kill the game off as a contest midway through the second half.

Leipzig may have been as poor as Nagelsmann's choice of suit but this was vintage stuff from Di Maria. Literally.

Not since 2013-14, when he played a pivotal role in Real Madrid's Champions League win has he been involved in as many goals in a single campaign (eight).

Di Maria, of course, was the Blancos' best player in the final that year.