Jurrien Timber: One half of the Ajax twins looking to follow in the De Boers' footsteps
Match

Jurrien Timber: One half of the Ajax twins looking to follow in the De Boers' footsteps 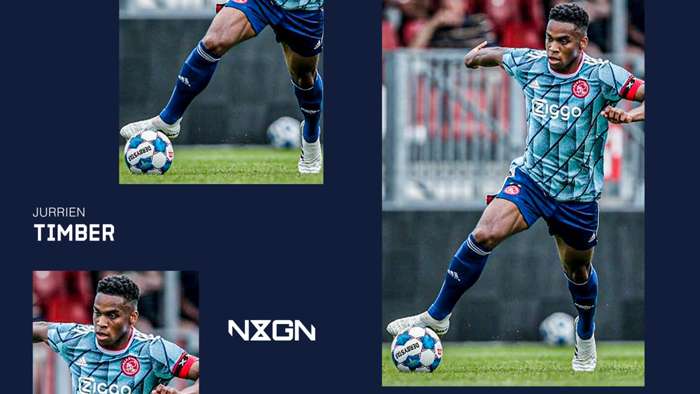 It was just over 30 years ago that Ajax were celebrating the emergence of Frank and Ronald de Boer into their first team having developed the highly talented twins within their world famous academy structure.

Now more than three decades on, a new set of twins are set to break through in Amsterdam, with it hoped that the Eredivisie giants have again found a pair of brothers who can go onto succeed at the very highest level.

Quinten and Jurrien Timber have stood out since they were very young, with their talent having been too much to ignore even back when they were taking their first footballing strides in their hometown of Utrecht.

"We actually only took on children from the age of six and there was a considerable waiting list, but as four-year-olds they were simply too good to refuse,” Twan Lenders, a youth coach at amateur club DVSU, recalled toAjax Showtime when discussing the pair.

“Nobody was afraid of the team beforehand, but they made sure that we immediately became champions against boys of seven and eight years old."

Such performances soon alerted professional clubs to the Timbers' talents, and after originally joining Feyenoord they moved to Ajax at the age of 13.

There they would join a group of players that have gone onto star throughout the club's age-group levels, with fellow teenagersRyan Gravenberch, Lassina Traore, Naci Unuvar, Perr Schuurs, Sontje Hansen and Brian Brobbey having already made an impact on the first team.

And while creative midfielder Quinten is still waiting to make his senior bow as he recovers from a broken foot, defender Jurrien is already part of Erik ten Hag's plans in the Dutch capital, with early signs suggesting he could become a world-renowned centre-back.

Those beliefs first surfaced when Timber was the youngest player called up to Ten Hag's winter training camp in January 2019, and in the time since he has continued to develop at a rapid rate.

Having spent much of last season representing Jong Ajax in the second tier of Dutch football, Timber was chosen by Ten Hagto make his first-team debut in a crucial clash against Heerenveen in March 2020.

With the teamlocked in a thrilling title race with AZ Alkmaar, Ajax knew that only victory would do, and Timber put in a mature display to help them earna crucial3-1 victory in what proved to be the club's final match of the season before coronavirus cut the campaign short.

The win ultimatelyensured Ajax would qualify automatically for the Champions League while AZ, who finished level on points with them in second, were forced to enter the qualifying rounds before eventually falling into the Europa League.

"There was a good chance that Jurrien could have started the matches after that, but that chance of a nice run of gameshas now been taken away from him," Ten Hag tolda press conference after the abandonment of the season was confirmed.

"However, he has proven himself, and I will take that into the new season."

Ten Hag was good to his word, and Timber - who previously played under his father's surname of Maduro - appeared in three of the club's opening four league games of the2020-21 season, including a start against Groningen in early October.

A minor injury has ruled him out of action since, though he returned to the matchday squad for Saturday's win over Fortuna Sittard and is likely to remain part of Ten Hag's plans going forward.

He was handed the No.2 shirt for the current season following Sergino Dest's move to Barcelona, and Ten Hag has used him at right-back as well as at the heart of his defence this season.

Despite being just 5' 9" (1.79 metres)tall, Timber's physicality has never held him back, with his astonishing speed, power and sense of positioning ensuring he is able to cope with the rigours of keeping attackers at bay.

He is also very comfortable in possession, and his passing ability has markedhim out as someone who could yet move position again before truly establishing himself.

"He could even play at left-back or in central midfield," Ten Hag toldAjax TVof the 19-year-old, who signed a new four-year contract with the club in September and has been noted for his leadership ability at various youth levels.

"He will not immediately be the leader of theAjax first team," Ten Hag continued, "but he dares to speak out immediately and has not been shy in the dressing room. Those are important qualities to get far."

Already a Netherlands Under-21 international, Timber is primed to go to the very top of the game if his development continues.