Juan Musso: Argentina's next No.1 tipped to succeed Oblak at Atletico Madrid

Juan Musso: Argentina's next No.1 tipped to succeed Oblak at Atletico Madrid 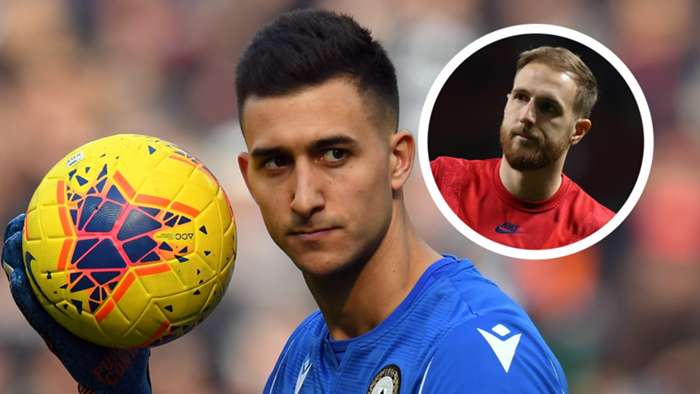 Rookie Argentina coach Lionel Scaloni has not escaped criticism during his first two years in charge. The successor to Jorge Sampaolihad never held a top job prior to taking over the Seleccion andmade some clear missteps in his first taste of competitive action in the 2019 Copa America.

If there is one thing that Scaloni should be lauded for, however, it is in pushing through a much-needed generational change in the ranks. Established stars like Leandro Paredes, Paulo Dybalaand Lautaro Martinez were already pounding on the national team doorbut the coach and his team deserve real credit for unearthing Udinese pair Rodrigo de Paul and goalkeeper Juan Musso.

Musso, 26, has been a consistent presence in the Serie A side's net since swapping Racing Club for Italy in 2018. A bargain purchase at just €4 million (£3.5m/$4.5m), the shot-stopper was something of an unknown quantity when he moved. He hadjust a single season of first-team football under his belt in Argentina.

But he settledquick in his new home, dislodging Simone Scuffet from the Udinese starting line-up within nine games of the 2018-19 campaign and never letting go of the No.1 jersey.

Musso has been one of the brightest lights for his club in two seasons marred by poor results and instability; in that time the Argentine has seen no fewer than four coaches come and go.

Any lingering doubts over whether the towering keeper was the real deal were answered in the past week with two impressive feats. First, on Thursday, Musso came up with a memorable performance between the posts to deny Juventus in a crucial 2-1 win for Udinese, all but guaranteeing the Friuli side safety from relegation.

International team-mate Dybala was among those left frustrated as he saw two shots saved by his compatriot, with Cristiano Ronaldo also coming up blank.

Just three days later Musso held firm to shut out Cagliari, his 13thclean sheet of the Serie A season. That is more than Juve's Wojciech Szczesny or any other goalkeeper in the Italian top flight, an exceptional achievement considering that he has done so in a team that has battled the drop throughout 2019-20.

His talents have already come to Scaloni's attention, with the coach handing Musso his Argentina debut last November. He will have no shortage of suitors in the transfer market once the current term comes to a close at the weekend.

“There is some interest in Spain from some medium clubs, but I think the lad is ready for a big club and Udinese owner Giampaolo Pozzo will not make him stay in Udine if the right offer comes,” Musso's agent Vicente Montes told Radio Marte .

“For example in Italy we have Inter, Napoli and Milan. In England, Watford, and in Spain, Atletico Madrid are following him closely to replace Jan Oblak in case he leaves.”

Despite the club's mixed fortunes in Serie A, Musso, now valued at €30m (£27m/$35m) by his employers, is not the only Udinese man gaining attention from Europe's elite.

CaptainDe Paul, like the San Nicolas native a graduate of Racing's famed academy, is also tipped for a big move in the coming weeks.

Four months Musso's junior, De Paul got his first-team break at Racing four years earlier than his colleague, breaking through as a teenager in an exciting young team that included the likes of Luciano Vietto, Ricardo Centurion and Bruno Zuculini.

His attacking talents earned him a move to Valencia, but it proved a false start for the youngster who soon faded at Mestalla and looked to be going nowhere when a subsequent loan move back to La Academia failed to kick-start his career.

Udinese had little competition for De Paul's signature when they swooped to sign him for just €3.5m (£3m/$4m)in the summer of 2016. But he proved another brilliant piece of business for the wily Pozzo, putting in strong performances off both the left and right wings as well as through the middle to establish himself as a key player.

It was former coach Davide Nicola, though, that finally prompted him to reach his potential, almost simultaneously dropping the forward into a central midfield role while handing him the captain's armband last season.

The change in De Paul has been startling. The flashy yet inconsistent attacking threat glimpsed at Racing and Valencia was replaced by a reliable roving midfielder, whose seven goals and five assists in 2019-20 prove that he has also not lost his touch when arriving in and around the area.

De Paul finished the 2019 Copa America as an undisputed starter alongside Paredes in Scaloni's Argentina engine room and last Thursday put in a superlative all-round performance to overshadow the likes of Dybala, Miralem Pjanic and Ronaldo.

With two key passes, six successful tackles and five interceptions, the Sarandi-born midfielder stole the show on the pitch, heightening his already burgeoning profile at precisely the right moment.

Juventus for one are likely to have paid close attention to their nemesis. Reports in Italy claim the Old Lady are following De Paul closely with an eye to a summer move, news that the player himself welcomed. “For it to come out that Juve are watching is huge,” he admitted to Libero following the clash.

“They are one of the world's biggest teams, and are strong not just in footballing terms but as a media giant too. All the same, I try not to get involved... Since it was a massively important game I focused on playing it and on making things go well.”

Wherever De Paul lines up for 2020-21, he is set to be a vital piece of theset-up when Argentina begin their delayed World Cup qualifiers, provisionally scheduled for September if the coronavirus pandemic in South America abates.

Musso, meanwhile, may have to bide his time a little longer, as he plans how to make the leap from the position of third-choice keeper to first. Standing in his way are Boca Juniors and River Plate pair Esteban Andrada and Franco Armani, accomplished number ones in their own right and with the benefit of the enormous, powerful media machine that follows the two Superclasico giants' every move.

The former Racing man, who played only fleetingly in his home nation,enjoys a comparatively more discreet profile; but he does, at 26, have time on his side against his rivals, aged 29 and 33 respectively.