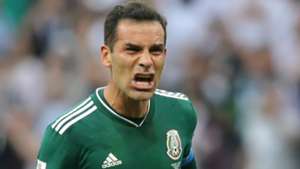 Longtime Mexico star Rafael Marquez says that Liga MX should be "worried" about the rise of MLS and the impact it will have on Mexican soccer.

During his time with the senior team, Marquez became only the third player to play for his national team in five consecutive World Cups, as the 41-year-old is Mexico's all-time leader in World Cup games played with 19.

Throughout his career, Marquez shined in both North America and Europe, having initially broken through with Atlas before heading to Monaco and, ultimately, Barcelona.

Marquez's big-money move to the New York Red Bulls was widely seen as a failure, though, as Marquez has since stated that he found it difficult to adapt to the drop in quality from Barcelona.

And, having since featured for Leon, Hellas Verona and Atlas before retiring in 2018, Marquez has seen MLS grown stronger, nearly to the points where he believes it will surpass Liga MX.

"I think that MLS is more attractive than coming to Mexico and that we should be a little worried about that," Marquez told Fox Sports. "We should try to enamor our players more so that they can come back and that would help the quality of football get better."

He added: "We should be working to improve and try to bring back these important players for our country."

This summer, several Mexican stars have made the move stateside, with Javier 'Chicharito' Hernandez, Rodolfo Pizarro and Alan Pulido all choosing to continue their careers in MLS.

Chicharito says that his decision is part of a shift that he believes isn't being acknowledged by fans of Mexican soccer, who still see their league as vastly superior.

Marquez agrees with that sentiment, adding that he believes playing in MLS is an option for Mexican players that have hopes of making the leap to Europe as he did.

"It is very appealing nowadays to play in MLS and many young players are thinking that, if they have a good performance here, they can be signed by a team in Europe easier than staying in their home countries," he said.

"Many people judge Rodolfo Pizarro for moving to the MLS but I hope that if he has a good season a team in Europe will sign him. I think he wants to play in Europe and maybe switching to MLS he can get that opportunity that he couldn't have in Mexico."

Still Mexican teams continue to dominate in the Concacaf Champions League, with Liga MX sides having won each tournament since the competition was reformatted.

This season, Los Angeles FC sent shockwaves by coming from 2-0 down to take down Club Leon.

"We saw what happened to Leon," Marquez said. "Who was beaten by Carlos Vela's [LAFC] and is on an upwards path, and it won't be long before they overtake us."