'It was the right thing to do' - Arsenal have no regrets over selling Martinez, says Arteta
Match

'It was the right thing to do' - Arsenal have no regrets over selling Martinez, says Arteta 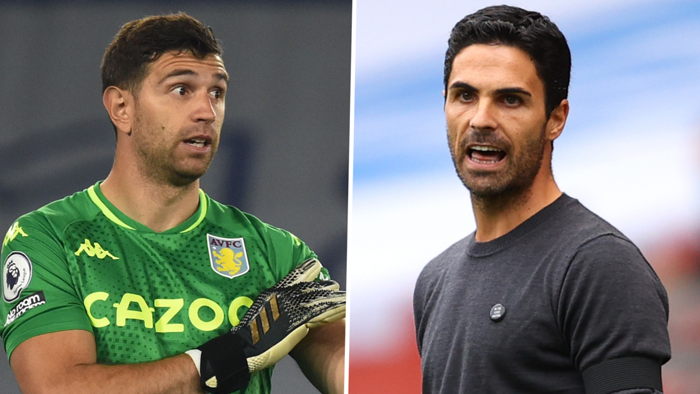 Mikel Arteta says Arsenal allowed Emiliano Martinez to leave for Aston Villa because it was the right thing to do for a goalkeeper who had spent more than a decade in north London.

The Argentine keeper had stepped in for the injured Bernd Leno during the final months of the 2019-20 campaign and played a key role in Arsenal’s FA Cup success.

But, with Leno’s return to fitness in the off-season, Martinez was not guaranteed to remain first choice and at 28 years old he was determined to play regular football.

So, when Villa came knocking, he was willing to make the move and, after some lengthy negotiations, a £20 million ($26m) deal was agreed between the two clubs.

Martinez will return to Arsenal for the first time on Sunday having enjoyed an impressive start to life at Villa Park and there are many who believe Arteta sold the wrong keeper in the summer.

But the Spaniard insists he has no regrets and believes the club did the right thing by granting Martinez’s wishes and allowing him to join a rival Premier League club.

“When we sat down we believed it was the right thing to do,” said Arteta. “He was still very willing to get the No.1shirt and play regularly – I think we had to give him the choice to decide where he wanted to play.

“He has earned a lot of respect in this country, he has been here for 10 years and with his performances for us in the last few months, he believed it was the right club for him so I was happy to let him go and make the right decision for his career.

“He has become really hungry, really competitive and was really clear about what he wanted to do in the next chapter of his career so I am sure he will be a success.”

Arsenal go into Sunday’s game, one place below Villa on goal difference in the Premier League table.

Last weekend’s away win at Manchester United got Arteta’s side back on track after successive defeats against Manchester City and Leicester, and Hector Bellerin was key to the 1-0 success at Old Trafford.

It was the Spaniard who was fouled by Paul Pogba for the penalty which resulted in Pierre-Emerick Aubameyang’s winner and Arteta believes Arsenal are now beginning to see the best of their full-back following the cruciate ligament injury he suffered in January2019.

“I think when you have a big injury like that it can take almost a year for your brain to reset and accept that injury and biomechanically become the same player,” said Arteta.

“After that you have to recover and rediscover those performances, that consistency in the minutes you are able to play – which is something he has struggled with in recent years – but when something starts to get more natural, you start to get the flow.

“He is more confident, he is playing regularly, he is able to do more things, he ends the game in a much better way physically and he recovers better.

“What happens, happens but his performances are getting better and better.”

Arteta added: "Hector is a player who has special feelings towards the club because he has been here a long time and he is very grateful for all the coaches, the staff, the club and the fans have done for him.