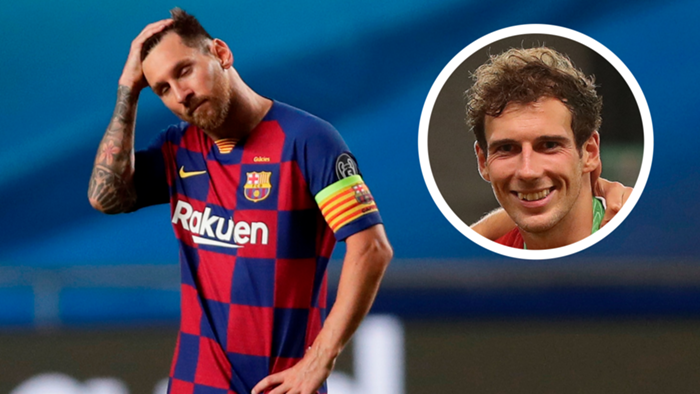 Bayern star Leon Goretzka says it was fun to take down Lionel Messi and co.duringthe extraordinary 8-2 humiliation of Barcelona in the Champions League quarter-finals.

The Bundesliga giants humiliated the Spanish giants and their Argentine star at the Estadio da Luz on Friday evening, with former Barca playmaker Philippe Coutinho grabbing a double, as did Thomas Muller.

There were also single goals to Ivan Perisic, Serge Gnabry, Joshua Kimmich and Robert Lewandowski, with Bayern now meeting the winner of Manchester City and Lyon in the last four of the competition.

Post-match, Goretzka was asked if it hurt to embarrass a possible childhood idol such as Messi, to which he replied:"No, it didn’t hurt, it was fun actually."

With Bayern now favourites to win the competition, Goretzka was pleased by their performance but insisted the team has to stay focused to reach the ultimate goal.

"It’s difficult to put this into words so soon after the game. I think it will take a couple of days to process this result," Goretzka told Sky Sports.

"We have so much confidence, but as we just said in the changing room we've taken the first of three steps."

Muller, who scored the opening goal of the game in the fourth minute, struggled to explain why Bayern were so dominant in the match.

But he insisted the team were only thinking about their next match when the result against Barca means nothing.