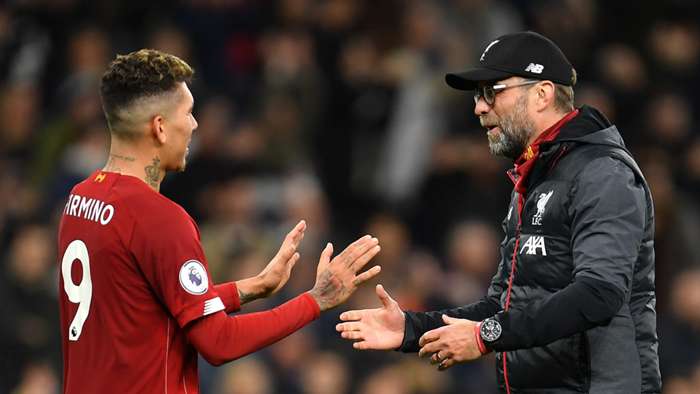 Liverpool boss Jurgen Klopp does not think Roberto Firmino's lack of home league goals will become a serious issue for the Brazilian.

Firmino's only home goal this campaign was against Atletico Madrid in the Champions League, while his last Premier League strike on his own ground was against Tottenham in March 2019.

The 28-year-old's Anfield frustrations continued against Burnley on Saturday when his second-half effort hit the post.

However, he also created six chances for his team-mates and Klopp does not think the player will be unduly affected by his home drought.

"It cannot become a psychological problem for him because Bobby played an outstanding game today and we don't judge him, so I hope he won't read your newspaper if you make a story of it," said Klopp.

"We only have chances because Bobby plays the way he plays, and he will score, there's absolutely no doubt about it. We are not worried at all about that, because he played an outstanding game today and was involved in so many decisive situations.

"Nobody scored apart from Robbo Robertson with a header, so it will not become a problem."

Klopp also revealed the reasons why he remonstrated with referee David Coote at the final whistle, saying he felt goalkeeper Alisson was not being given enough protection at set pieces.

The German marched on to the pitchto confront Coote at the end ofSaturday's 1-1 draw, which ensuredLiverpool's 24-game home winning run in the Premier League came to an end.

"I spoke to the referee about the goalkeeper situations," added Klopp.

"I feel like we've lost the game, we didn't, I know that, and maybe it's not the best time to talk about these things … but how can you let it happen? When a corner comes in, three players are allowed to block the goalie - that's just not how it should be.

"But for the ref it was not a foul or not a problem and that's why he didn't whistle in these situations. That's what I told him, but it had no influence on the result."

Andy Robertson headed the Reds in front during a dominant first half, but they were unable to add to their tally with Nick Pope in inspired form.

Jay Rodriguez fired a 69th-minute equaliser in for Burnley and they would have won it had Johan Gudmundsson not been denied by the crossbar late on.

The draw dented Liverpool's hopes of surpassing Manchester City's record haul of 100 points – they must now win their remaining three games to do so.