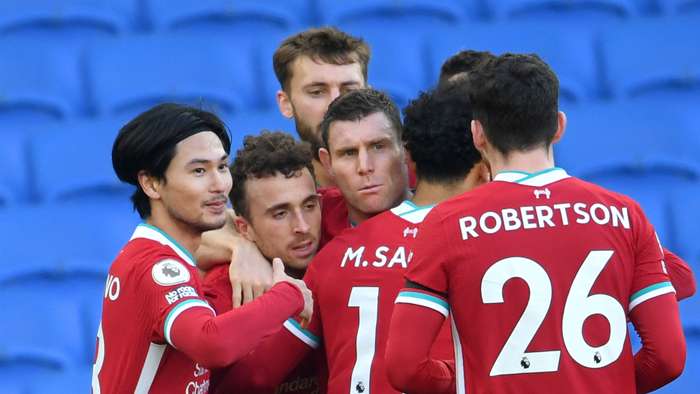 Jurgen Klopp believes it will be tough to programme Premier League stars to change goal celebration habits overnight as football tightens up its social distancing rules.

Those can take place at any time but are particularly likely when a goal is scored, when there is typically a rush to congratulate any player who finds the net.

Out goes the normthis weekend, however,as clubs have been reminded in follow-up calls to captains and managers that such behaviour must be avoided.

Football authorities are determined to stick to coronavirus era protocols as keenly as possible, to avoid further rises in cases among players and to ensure the leagues can continue during lockdown.

Liverpool boss Kloppbelieves so many new measures have been introduced and respected that risks on the field are already low, saying his players have done "an incredible job to be disciplined".

"We stick to the rules, and if now somebody says if you do this again we have tostop the game I wouldn't understand to be honest, but I'm not the decision maker," he said ahead ofhis side's match against Manchester United at Anfieldon Sunday.

"I understand rules have to be strict … but we have to learn from the things that have worked in the past few months and football worked."

When goals go in across the country this weekend, the instinct of many players will be to embrace team-mates, and there seems likely to be cases where the new advice is forgotten.

"If there's something to celebrate it will be in an appropriate way, but it's difficult," Klopp said.

"Football is an emotional game andwhat we should not forget in thediscussion about this is these players are tested two or three times a week.During the week we reduce contract toa minimum."

He added: "If we would think and feel we would threaten one or two of our team-mates with a goal celebrationwe would never do it, it would just not happen."

Tottenham boss Jose Mourinho, whose side take on Sheffield United on Sunday, said the north London club were "very, very strict with what the Premier League asks us to do".

But his stars, including the likes of Harry Kane and Son Heung-min, are not being coached on how to avoid celebrations.

"We're not training not to celebrate goals," Mourinho said.

His suggestion is that a scorer should celebrate as exuberantly as before, unleashing the emotion that a goal can stir, and that others should stand off.

"For players on the pitch, it's a very individual thing," Mourinho said. "My advice is maybe the guy who scores express the emotion of the team by himself, alone.