'It's a one-off' - Lampard keeping Chelsea grounded after Liverpool upset 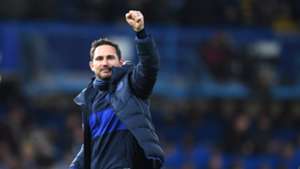 Chelsea manager Frank Lampard described Chelsea's 2-0 win over Liverpool in the FA Cup fifth round as a "one-off" as he looks to continue pushing his side forward this season.

Goals from Willian and Ross Barkley secured a surprisingly routine win for the Blues as the Reds stumbled to a third loss from four games in all competitions.

With Jurgen Klopp's side previously boasting a perfect record in the Premier League and Lampard's men battling to secure a top-four finish, the Blues boss stressed the result is a rarity but one to savour nonetheless.

"[I'm] really proud because they [Liverpool] are the best team in the land," Lampard told BBC Sport post-match.

"Them and Man City have proven that in the last two years, but this year, what they're doing in the league is incredible. So for us to put in the effort, the focus, the determination, the quality we put into the game was something special tonight.

"It's a one-off and we know, are very aware, there's a lot of work and a long way to go to get to where we want to go but you have to celebrate those moments. Particularly when you get a second [goal] because you know how dangerous Liverpool are until the last minutes, so to go 2-0 up was great."

Lampard handed 18-year-old midfielder Billy Gilmour a rare start for the Blues and was rewarded with a man-of-the-match showing as the Scottish teenager showed his significant promise.

It wasn't all smooth sailing for Chelsea however with both Willian and Mateo Kovacic forced off with injuries.

The Blues are currently fourth in the Premier League, only three points clear of fifth-placed Manchester United, and next host Everton at Stamford Bridge on Sunday having won just one of their last six league games.

Following that clash against the Toffees, Lampard's side travel to Aston Villa on March 14 before heading to Bayern Munich for the second leg of their Champions League last-16 tie.

Chelsea fell 3-0 at home in the first leg and now face a massive fight to overturn that deficit in Germany.