'It's a failure' - Mourinho critical of PSG's Champions League struggles

'It's a failure' - Mourinho critical of PSG's Champions League struggles 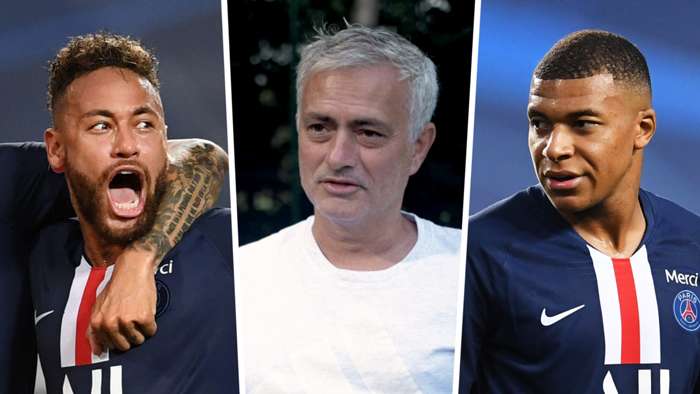 Jose Mourinho says it's a "failure" that Paris Saint-Germain haven't already won the Champions League with the amount of money that has been spent on the squad over the past decade.

Goals from Marquinhos, Angel Di Maria and Juan Bernat rounded off a comprehensive victory for Thomas Tuchel's men, who will face off against five-time winners Bayern Munich in the showpiece eventon Sunday.

Since Qatar Sports Investments' takeover at Parc des Princes in 2011, PSG have emerged as the dominant force in French football, but success on the European stage has proven elusive.

The reigning Ligue 1 champions hadn't gone beyond the quarter-finals prior to this season, with their best showing in the competition coming way back in 1994-95 when they reached the semis.

PSG were knocked out in the round of 16 in both of their previous campaigns, allowing sizeable leads to slip against Barcelona and Manchester United, but they have looked a far more cohesive unit this time around.

Although Mourinho acknowledges the brilliance of Tuchel's current crop, he believes it has taken far too long for the club to arrive on Europe's biggest stage.

Asked if PSG's season should be deemed a failure if they don't win the Champions League, theTottenham boss, who lifted the trophy at both Porto and Inter, told DAZN: "I think it is a failure that they didn’t win it in the two seasons before because for five or six years the investment is crazy, the list of top players that is there is incredible.

"For how many seasons Thiago Silva is there, Marquinhos is there, and then all the big guys,Ibra Zlatan Ibrahimovic, Edinson Cavani, Neymar, Kylian Mbappe.

"It’s, of course,their dream and for the first time they arrive in this kind of situation and this is the kind of game where these guys normally flourish, even if I think that as a team they are nothing from other world, these are players from another world.

"In these moments, normally they flourish, and so I would say that Bayern, in spite of being really, really strong as a team with some special players, they have to think that Paris can hurt them and start the preparation for this match not just on can we hurt them, but how can they hurt us?"

The quarter-finals and semi-finals were played in straight knockout format this term in order to ensure that the competition reached its conclusion amid the coronavirus crisis, with many fans and experts praising the new system for adding extra dramatic weight to the latter rounds.

However, Mourinho remains a strong advocate of the two-legged format, adding: "Because football is for the fans and because football is a lot about the passion and about being mentally very strong to cope with big matches, big semi-finals, big quarter-finals, and go away andplay against 70,000, let’s say enemies, and I love this feeling.

"You have to be very strong to play two legs and to play with the mental side of it. I think the one leg is better for the outsider, if you are an outsider you play a single match an anything can happen, but I like the big pressure of the two legs.

"And it also measures your resilience because you play the semi-final and two or three days later you have a big match in your domestic league, and you have to cope with all these things.

"You have to make big decisions and across the season as a whole, I prefer the double leg."