'It is not our business' - Setien worried about Barcelona, not Real Madrid

'It is not our business' - Setien worried about Barcelona, not Real Madrid 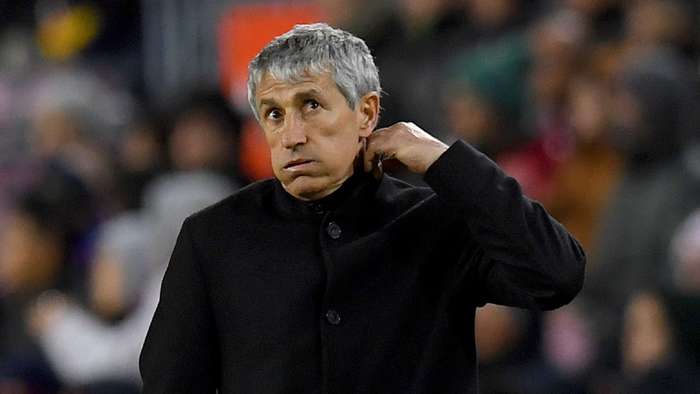 Quique Setien is unworried about Real Madrid after Barcelona moved back within a point of their rivals with a 1-0 win over Espanyol on Wednesday.

Both teams were reduced to 10 men in the derby clash at Camp Nou before Luis Suarez scored the 56th-minute winner.

Barca have played one more game than rivals Madrid, who are a point clear at the top and host Deportivo Alaves on Friday.

But Setien is refusing to worry about Zinedine Zidane's side, with Madrid having four league games left to play.

"It is not our business. We have to worry about ourselves," the Barca head coach told Movistar. "What Madrid does we will see."

After Ansu Fati was sent off in the 50th minute, Pol Lozano saw red for Espanyol three minutes later.

Setien accepted his team were below their best three days after crushing Villarreal, with Suarez's goal boosting their title chances.

"We did not have a great match. They have made it difficult for us in defence," he said. "We have not found spaces nor have we had precision to handle ourselves."

Barcelona's busy run of fixtures continues with a clash against Real Valladolid on Saturday.

Suarez echoed his manager's comments post-match, stressing the Catalans must remain focus on themselves to ensure they are ready to pounce should Zidane's men slip up.

"What we have to do is win our next three games," Suarez said."Whatever Madrid do is up to them.

"If the rival drops points then fantastic, we have to think about being there if they do."

On the Espanyol game, Suarez added:"We knew it was going to be difficult. We knew their situation. We have to be aware of the fact that we put in a great performance on Sunday and were still feeling the consequences of that physically. The important thing is to win and to get three more points.

"I think if I didn't score in the first half or Barcelona didn't create more chances, that's virtue of the rival, who were very well organised.