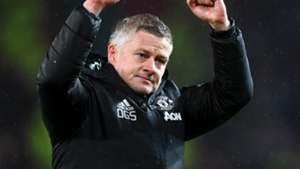 Ole Gunnar Solskjaer feels it is a "privilege" to be at the helm of the current Manchester United squad after they saw off rivals City in a battling derby display.

Goals from Anthony Martial and Scott McTominay sealed the hosts' 2-0 victory, aided and abetted by glaring errors from usually unflappable City No.1 Ederson.

But United also had to stand firm prior to McTominay's 96th minute goal, with the visitors enjoying over 70 per cent of possession and constantly looking for a way through to David de Gea in the Reds net.

Ultimately Solskjaer's charges were just winners, and the Norwegian could not be happier with their display as United celebrated their first Premier League 'double' over City since the days of Sir Alex Ferguson.

"The desire, attitude, commitment, connection between fans and players pleased me most. At times we pressed them, pushed them back, we tried to be aggressive," he told Sky Sports following the final whistle.

"We made them make mistakes and we are happy with the result."

The Reds' opener came thanks to a neat prepared move, with Bruno Fernandes angling his free-kick into the path of Martial to send the charging France forward through and catch the City defence unawares.

And while the pair are only just starting to click following Fernandes' January move from Sporting, Solskjaer sees a lot of potential in their partnership - and in his team as a whole.

"Anthony and Bruno have hit if off. It is a privilege to be a manager of a squad with this attitude. You can't ask for more. They are going to improve as players as well," he added.

"Those little things will come but it is a privilege and they want to listen to advice.

"For our players to beat a team like Manchester City is fantastic, I am delighted for them."

The manager added to BBC: "With all the clean sheets we have been getting it's impressive, we are getting better.

"With Brandon Williams and Aaron Wan-Bissaka on the flanks we looked aggressive as a 3-5-2, but in the second half we were made to look more like a 5-4-1. City are so good on the ball, but we kept them at bay.

"At any moment they could score so I was always looking for a second goal. We had three chances to square with only the goalkeeper to beat. That's one thing to improve - our decision-making - but we are learning.

"It's a privilege to be their manager. They give absolutely everything. They know they are all good players but they want to learn as well.

"We feel we are improving as a squad and a team. We feel the fans want us to do well and they see what we are doing, so it is getting better and better.

"But we are still fifth. We need points to catch Chelsea and Leicester, so need to keep plugging away."