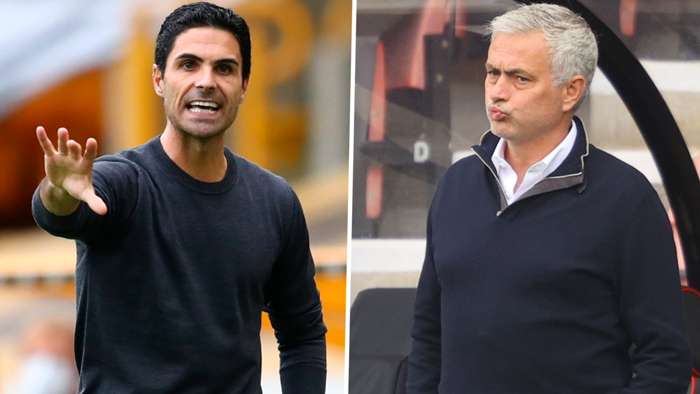 It was a suggestion that brought about an immediate response from those inside Arsenal.

However, denials swiftly emerged from the Emirates, with theclub keen to distance themselves from any links to a man who clashed so many times with former manager Arsene Wenger.

“We’d be selling our soul,” one source said. “Raul has not seen Jose in person for years,” another made clear.

The mere suggestion of Mourinho taking over at Arsenal was enough to stir up a hornet's nest of emotions amongst fans.

There were some who welcomed the link to a manager who was viewed as a ‘winner’, but others were appalled by the idea, given Mourinho’s past, his style of play and of course his countless ugly run-ins with Wenger.

It was a conversation that quickly died down, however, as within three weeks, Mourinho had pitched up at the other end of the Seven Sisters Road in north London, replacing Mauricio Pochettino at Tottenham.

Arsenal, meanwhile, turned to their former captain, bringing Mikel Arteta back to the club to take over from Emery, who was sacked nine days after Spurs had unveiled Mourinho.

Two clubs, just four miles apart, had gone down very different routes in an attempt to revive themselves just six months after both had been beaten in European finals.

For Arsenal, it was a step into the unknown. Arteta, a young head coach who had been schooled under the best in the business, Pep Guardiola, was tasked with rebuilding a club that had lost its way following the departure of Wenger two years earlier.

But down the road at Tottenham it was a different story. Daniel Levy had opted for the tried-and-tested option.

Whereas Arsenal had made an appointment with an eye on the future, Spurs had arguably turned to a man relying on past glories to achieve short-term success, whether that be trophies or staying in the top four.

Now, seven months later, the two coaches are set to go head-to-head for the first time as the Gunners make the short journey across north London to take on their rivals on Sunday afternoon.

They go into the game with Arsenal sitting eighth in the table, just one place and one point above their neighbours, with just four matches remaining.

The lowly league positions tell the story of their respective campaigns. This derby will be about possible qualification for the Europa Leaguerather than the Champions League, highlighting just how much standards have slipped in north London.

But, at Arsenal at least, there is a tangible sense that the tide is turning; that the club is on the right path under a young, energetic coach who has made significant improvement to the side he took over in December.

At Spurs, however, the 'Mourinho effect' has yet to kick in. There is growing unrest amongst the fanbase regarding the results and style of play, something that was clearly evident once again in the aftermath of Thursday night’s 0-0 draw at relegation-threatened Bournemouth– a game in which the visitors fail to muster a single shot on target.

When Arteta took charge of Arsenal for the first time and guided them to a 1-1 draw at Bournemouth on Boxing Day, they were 11th in the table, five points behind Tottenham, who were in fifth. But they have picked up 26 points from their last 15 games, while Tottenham have earned just 20.

Since the turn of the year, only Liverpool, Manchester City and Manchester United have accrued more points thanArsenal. They have won seven of their 14 games, drawn five and lost just two.

They have also kept seven clean sheets during that time, with the tactical adjustments being made by Arteta clearly making a positive impact and improving players that had been written off under Emery.

Young players are being given a chance to shine. Bukayo Saka, for example, is going from strength to strength under Arteta. The teenager now has 12 assists and four goals this season and last week he ignored interest from several of Europe’s top clubs to sign a new four-year contract.

“Mikel is amazing,” said Saka. "He manages to give so much detail while at the same time being so clear. It's just amazing to have such a great coach. The future looks bright and that's why I'm happy to be here.”

Saka is just one of several youngsters now making their mark on the first-team. Academy products Ainsley Maitland-Niles, Joe Willock, Eddie Nketiah and Reiss Nelson are regulars – then there is Gabriel Martinelli, who has been a revelation since arriving as a 17-year-old from Brazil last summer.

Kieran Tierney, now finally injury free, is showing why Arsenal were so determined to sign him from Celtic last summer and William Saliba will arrive soon, having been immediately loaned back to Saint Etienne after agreeing to move to the Emirates last summer.

There is a youthful energy around Arsenal nowadays that has been harnessed by Arteta. There is still plenty of room for improvement, of course, and Pierre-Emerick Aubameyang leaving at the end of the season would be a major blow, but there is still a sense of optimism at the club now about what the future may hold.

Conversely, a few miles down the road things seem to have gone a bit stale. Spurs may have reached the Champions League final just 12 months ago, but now they are facing up to their first season outside of Europe’s elite competition since the 2015-16 campaign.

They have an ageing squad and very little money to reshape it, with the club having had to take a £175m ($198m) loan from the Bank of England to aid them during the coronavirus crisis. And for all that Mourinho has achieved since he arrived in England, he has not shown he can rebuild a squad on a limited budget.

It’s been four years since Arsenal finished above their rivals in the league, with the balance of power in north London having undeniably shifted slightly towards Spurs in recent seasons.

But should Arteta’s side beat their neighbours this weekend, they will move four points ahead of them in the table with just three games remaining. It would also put them firmly in the driving seat for a Europa League place.

Arsenal have a real opportunity to lay down a marker against their rivals on Sunday. Victory would be another sign that the club chose wisely when turning to the young Spaniard in November, while defeat for Tottenham would only increase the belief held by many that Mourinho’s best years are firmly behind him.