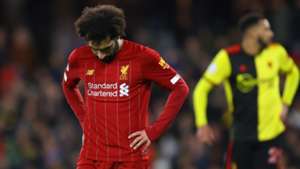 Talk of emulating Arsenal's 'Invincibles' had become an unwelcome distraction for Liverpool, says Stan Collymore, with the Reds expected to kick on again now that they have got a defeat out of their system.

After going 44 Premier League games without coming unstuck, in a run which lasted well over 12 months, Jurgen Klopp's side finally buckled when suffering a 3-0 reversal at Watford.

The opportunity to set more records and match the achievements of an iconic Gunners side from 2003-04 has passed the Reds by.

Collymore considers that to be a good thing, with a side that remain 22 points clear at the top of the table and well on course for a first title triumph in 30 years now able to realign their focus.

The former Reds striker told The Mirror: "Now all the Invincibles talk will stop, which will serve Liverpool well because I don't think that helped.

"The notion that they have lost will make the players sit up and realise they've got to win just four games to lift the Premier League title.

"There will be a real focus on the other tournaments, too.

"There was so much talk about -Jurgen Klopp's men going unbeaten and winning the league. That was becoming the overriding story of the season - could they be the best Premier League team ever and get 100-odd points? To be fair to Klopp and his players, it has not been them who have been talking about this.

"Now they can say we still have work to do in the Premier League, which will take us into April, we've still got the FA Cup and the Champions League."

Collymore added, with Liverpool preparing for a run of games against Chelsea, Bournemouth and Atletico Madrid across FA Cup, Premier League and Champions League competition: "What Mo Salah and his team-mates will have learnt from that defeat is unless you are at your very best and completely switched on for every match, anybody in the top flight can trip you up - including any team in the bottom three.

"They will look at that and redouble their efforts in the three remaining competitions.

"Historically any sportsman or woman who has suffered a shock defeat, all great champions all get back to basics and doing what got them to the top in the first place.

"If Liverpool had been playing well and -winning games for the last five or six weeks, we would not even be -discussing this right now.

"But a lot of people have rightly pointed out that they have not been playing well and so now it's an -opportunity to take a step back, refocus and go again.

"Not only will they do that in the Premier League, I think you'll see a concerted effort in the Champions League and there could be a cracking night at Anfield next week, almost Barcelonaesque, when Atletico Madrid arrive for the second leg 1-0 up.

"I think the Reds might go stronger in the FA Cup against Chelsea, too. Of course, it won't be the starting XI you would expect in the league, but one or two more senior players may figure."