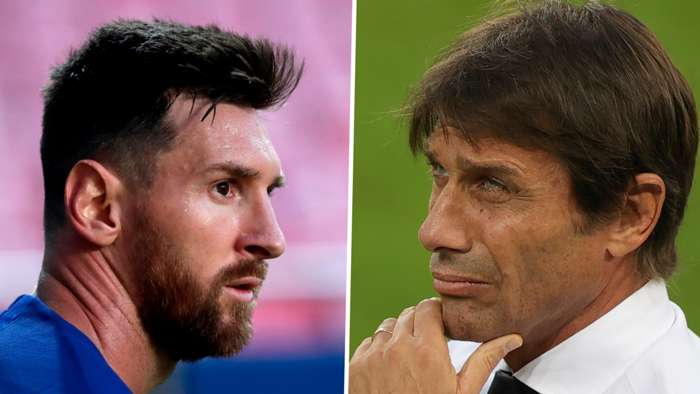 Just a couple of hours after Inter announced that Antonio Conte would continue as coach, Lionel Messi dropped the bombshell that he wants to leave Barcelona.

That Inter would dearly love to sign Messi is an open secret; whether the club's Chinese owners have sufficient funds to pull it off remains unclear.

Of course, if the Argentine can unilaterally cancel his contract – and Barca dispute this crucial claim– then it suddenly becomes a far more feasible economic operation, particularly when one considers that Messi's desire to move is motivated not by money, but by being part of a winning project.

However, Inter's dream signing still does notlook like a realistic proposition; it remains more of a "utopian fantasy" as CEO Beppe Marotta put it.

Josep Maria Minguella, the agent who played a pivotal role in taking Messi to Barcelona as a 13-year-old, believes that the No.10 would move to Inter for financial reasons.

"In Italy, they pay less tax," he told Cadena COPE, "It's harder for me to see him in England, no matter how long his friends Sergio Aguero and Pep Guardiola have been at Manchester City."

But we know that Guardiola wants his former charge at the Etihad, and their reunion makes far more sense than Messi playing under Conte.

The Italian has noteven been able to find a place for Christian Eriksen in his starting line-up; how on earth would he accommodate Messi, a player that contributes even less from a defensive perspective?

If any player is to join Inter from Barcelona in the coming weeks, it isfar more likely to be Arturo Vidal, one of Conte's long-term transfer targets.

Of course, Inter will continue to monitor the situation closely and Conte would hardly veto the arrival of arguably the greatest player of all time.

But the important thing to remember here is that while Inter would love to sign Messi, they do notnecessarily need him.

The primary reason why Conte is still at San Siro is that, in spite of all of the issues he has had with the club, he is clearly building a team capable of ending Juve's domination of Serie A.

Keeping Conte, as Matteo Dore wrote in the Gazzetta on Wednesday, "was a matter of common sense".

Inter president Steven Zhang proved key in that regarding, returning to Italy for the first time in months to essentially broker peace talks between the warring factions at the club.

There have been numerous differences of opinion between Conte and Marotta, while it was reported at one point that sporting director Piero Ausilio would leave if the coach remained.

Remarkably, though, Zhang has managed to keep everyone happy, which can only be construed as a positive for Inter.

Certainly, nobody could question Conte's commitment to the cause – toppling a Juve dynasty that he started – or the excellent work he has done since taking over.

It is worth noting that he even managed to win over some of the club's most hardcore fans in spite of his close sporting ties to Turin, first as a player and then a coach. "The real Interesti are with Conte," read one banner recently unfurled by a Curva Nord ultras group.

Jose Mourinho would probably be the first to point out that Inter finished the 2019-20 with "zeru tituli" but real progress has been made over the last year.

Conte's side finished second in Serie A, just one point behind Juventus. Even accounting for the fact that Bianconeri eased off after clinching the Scudetto, Inter deserve credit for getting so close to the champions. After all, they had finished fourth in 2018-19, a whopping 21 points behind Juve.

In addition, Inter boasted the best defence in the league – just 36 goals conceded – and were only outscored by a ridiculously attacking Atalanta side. Meanwhile, the Nerazzurri's points haul (82) was their highest since the treble-winning campaign of 2009-10.

Thenthere is Conte's bond with the players.

He is a notoriously frank communicator. "His words assault you", as Andrea Pirlo once wrote in his autobiography. But he has united a dressing room previously left divided by former captain Mauro Icardi.

The youngsters at the club have benefitted enormously from his coaching. "He teaches football," according to Alessandro Bastoni.

Nicolo Barella, meanwhile, says that Conte has changed his entire mentality. "I use my mind a lot more now," the midfielder told Sky Sport Italia.

The biggest success story is obviously Romelu Lukaku, who matched Ronaldo's tally of 34 goals in a debut season at Inter.

Lukaku, like every other player, was devastated by last week's Europa League loss to Sevilla, not least because he had scored the own goal which decided the game.

However, the Belgium forwardwas among the most vocal when it came to urging Conte to continue.

Before Tuesday's three-hour summit with Zhang in Varese, the coach was inundated with messages of support from not only the players but employees at every level of the company.

According to the Gazzetta, the outpouring of emotion played a pivotal role in convincing him to finish what he has started at Inter. It certainly would have been a shame if the foundations he has laid over the past year were immediately torn down.

As it is now, though, Inter have an immediate advantage over Juve, who have boldly decided to start a new project with a rookie coach in Andrea Pirlo.

Pirlo even admitted in his first press conference that he would like to see his team play with the "same desire and cohesion" as Conte's.

If Inter, then, can now achieve real stability, they will have every chance of winning a first Scudetto since 2010.