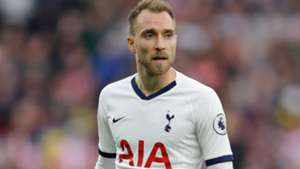 Inter CEO Giuseppe Marotta has revealed that talks with Christian Eriksen's agent are ongoing, with the playmaker's current deal at Tottenham set to expire at the end of the season.

Eriksen has been heavily linked with a move to San Siro for months, and Nerazzurri boss Antonio Conte has admitted that he is in the market for players "who are at the end of their contracts".

After Tottenham's FA Cup third-round replay win over Middlesbrough in midweek, head coach Jose Mourinho said Eriksen could "leave the club with his head held high", but he has since criticised Conte for speaking to reporters about the 27-year-old.

Marotta has now confirmed that Inter have held talks with Eriksen's representatives over a possible move, but is unsure whether an agreement will be reached this month.

"Eriksen is a Tottenham player, but his contract expires in June, so it's entirely legitimate and authorised to see his agent in this period," the Inter chief told Sky Sports Italia.

"That's a long way off saying he'll come here in January or June, because there is a great deal of competition and we don't know what will happen yet."

Goal has learned that Inter are already closing in on one Premier League star, with Chelsea's Olivier Giroud agreeing to personal terms with the club after being offered a two-year contract at San Siro.

However, Marotta says Inter are still in the process of evaluating a deal for Giroud, as they attempt to clear a path for his arrival by offloading Matteo Politano.

He said: "It's normal that management works to prepare various negotiations so there are alternatives if it doesn't go through. I won't deny we spoke to Giroud's entourage, we will evaluate the situation.

"The two moves could be linked, but what doesn't happen on the transfer market today could happen tomorrow."

When asked to address rumours of a possible swoop for Victor Moses, who is currently on loan at Fenerbahce from Chelsea, Marotta responded: "He is a candidate, certainly."

The 62-year-old went on to explain why Politano's proposed return to Roma fell through on Friday, with Leonardo Spinazzola originally lined up to join Inter in exchange.

"I think there has been this excessive media attention on the whole situation," Marotta added.

"Spinazzola is a fine professional who I already worked with at Juventus. I think in football that before being finalised, negotiations must go through valuations on a technical, medical, economic and physical level.

"Once we had completed all those evaluations, the club could not go ahead with this transfer and I told my colleague at Roma that we couldn't go through with it.

"I have to say that Roma releasing photographs of a player undergoing a medical is not up to us. Spinazzola didn't take any pictures with us.

"With all due respect to Politano, we explained the situation to him. We are professionals and get accustomed to this sort of thing, so we'll evaluate his future together before the end of the transfer window."