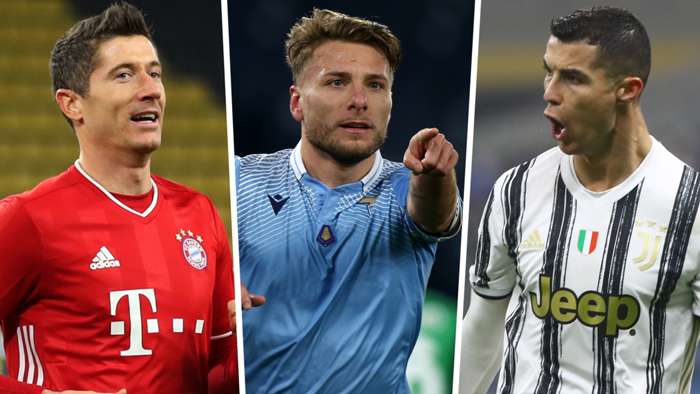 He has a further 14 efforts to his name this season and is currently readying himself for a showdown with Bayern superstar Lewandowski in the last-16 of the Champions League.

Italy international Immobile told UEFA’s official website: “What do I like most about Robert Lewandowski? The fact he is never satisfied.

“Every year he tries to improve and go beyond his limits, even if they are already exceptional. He is a complete striker. I think he is currently the best No 9 in the world, so we have to be very careful.

“It was crazy to beat him in the race for the Golden Boot. To challenge great players like him and Ronaldo brought me great happiness.”

Bayern frontman Lewandowski currently leads the way, with the prolific Pole finding the target on 26 occasions in the Bundesliga this season.

Andre Silva (18 goals) and Erling Haaland (17), of Eintracht Frankfurt and Borussia Dortmund respectively, are trying to chase him down in Germany.

Romelu Lukaku of Inter (17) tops the charts in Italy, with that tally being matched by Liverpool talisman Mohamed Salah in the Premier League.

Ronaldo, Luis Suarez, Kylian Mbappe and Lionel Messi are among those on 16 goals, with Immobile sitting alongside Zlatan Ibrahimovic on 14 – one behind Manchester United playmaker Bruno Fernandes.

Lewandowski and Immobile are set to clash this week when Lazio host Bayern Munich in their Champions League round of 16 first leg clash, and former Germany forward Miroslav Klose - who represented both clubs during his stellar career - has been running the rule over the strikers.

Klose, now a coach at Bundesliga champions Bayern, told Gazzetta dello Sport:"For me Lewandowski is an absolute top player. Before I rated him highly, but now that I train him and see him every day I can say that he has very few weaknesses.

"Robert is two-footed, he is strong when heading, he understands situations, he's fast. In my opinion, Immobile is very good. He creates opportunities, he knows how to play deep, he has a good shot.In my opinion, however, Lewandowski has something more."