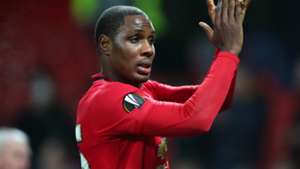 Odion Ighalo is the striking "bully" that Manchester United have been crying out for, says Dimitar Berbatov, with the Nigerian frontman proving plenty of people wrong at Old Trafford.

Eyebrows were raised when the former Watford star was brought back to English football from Shanghai Shenhua.

Ole Gunnar Solskjaer's search for more firepower had dragged on into deadline day, with a deal for Ighalo pushed through as the winter window came to a close.

Plenty questioned whether he was the right man for United's No.9 role, but an early flurry of goals has silenced his detractors in style.

Berbatov admits to being wrong when it comes to the 30-year-old's value, with it looking as though the Red Devils have pulled off a shrewd piece of business.

The former United striker told Betfair of a man looking to earn a permanent transfer: "I'm really happy to see that Odion Ighalo is settling in well and he deserves it with the way he is playing, how he links the plays and the goals he is scoring.

"All the team are happy when he scores which shows he is fully integrated, and I like the way he looks for the ball and bullies the defenders.

"I'll be honest, I didn't know too much about him before he joined, obviously I knew about his record in the Premier League, but I questioned if he was the right man and if he would get into the team, but so far he is doing well and proving me wrong.

"When you need to play more direct in a game you need a presence in the box, a guy who knows how to get onto the end of a ball, bully the defenders and win the ball.

"Ighalo can do that, but he can also play, is technically good as well, he can keep the ball and give it to his team-mates and get into the box, that's why I like him.

"He doesn't just stay in the box and try to head the ball. He is linking really well with others and that shows in the team performances when he is involved."

Ighalo is not the only January addition to be catching the eye for United, with Bruno Fernandes also looking to be quite a coup.

The creative Portuguese midfielder has slotted seamlessly into the fold and is being backed to inspire the Red Devils again when they take in a derby date with Manchester City on Sunday.

Berbatov added: "Bruno Fernandes is scoring and is full of confidence, he gives the team that extra creativity and hopefully his first derby will be a win, and why not.

"When you come into a new country and a new team you already know who your big rivals are going to be and now in the lead up to Sunday he is going to know what this game is all about.

"These days, even if you don't watch football you know who Man City are and who plays for them. Fernandes will have done his homework and he will be prepared.

"These two teams know each other so well, some of them probably go for dinner together, you have these things, but when you step onto the pitch it's about my team not yours."