Ibrahimovic undecided about his future with AC Milan contract expiring

Ibrahimovic undecided about his future with AC Milan contract expiring 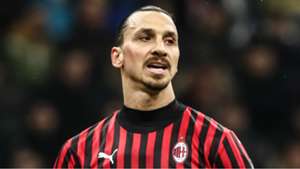 Zlatan Ibrahimovic is unsure what his future holds amid reports he will leave AC Milan at the end of the season and possibly retire.

Ibrahimovic, 38, returned to Milan in December and scored four goals in 10 appearances before the campaign was stopped due to the coronavirus pandemic.

The former Barcelona, Inter and Manchester United star is reportedly considering his future, with his contract at AC Milan expiring at season's end.

But Ibrahimovic said even he was unsure about what was ahead as he considers his options.

"I don't even know what I want. Something new happens every day. Who could have predicted this with corona? We just have to try to live and enjoy life.

"Don't worry too much. I have a family to take care of, they feel good so I feel good."

Ibrahimovic said the health of the community had to come first, with the Serie A season suspended indefinitely.

"It started to spread to football. They shut down the whole training facility, we were not allowed to move outside," he said.

"It is tragic that football leagues shut down, but we must respect the system and be patient. They must find a solution that is good for the whole community.

"Health is above all sport. I'm not worried about corona. I think it will be solved, it's just to wait until the experts know what to do."

Before joining Milan, Ibrahimovic was in discussions to join Championship side Leeds United, according to the English club's owner.

"He could have given us that decisive push but he decided to go to AC Milan. He has been very honest and transparent with me.

"We need to be rational and coherent with the strategy of both coach and team. I did not even speak with [coach] Marcelo Bielsa about Cavani and Ibrahimovic because we never got to the stage that we could sit down and talk about them."