‘I was playing Ronaldo on FIFA, then in real life!’ – Spurs star Tanganga reflects on meetings with CR7 & Mane

‘I was playing Ronaldo on FIFA, then in real life!’ – Spurs star Tanganga reflects on meetings with CR7 & Mane 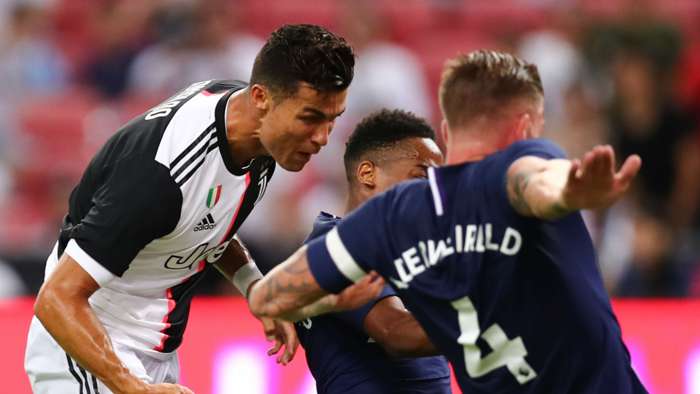 Japhet Tanganga has been reflecting on a memorable breakthrough campaign at Tottenham which saw him go from playing against the likes of Cristiano Ronaldo and Sadio Mane on FIFA to facing the Juventus and Liverpool superstars in real life.

He figured in International Champions Cup fixtures during a busy summer, with one of those outings seeing him come up against Serie A title holders Juve and a certain five-time Ballon d’Or winner.

“That was crazy! It didn’t feel real in many ways,” Tanganga told talkSPORT of lining up against Ronaldo.

“I was thinking, ‘I was just playing this man on FIFA but now this is real life, I’m playing against one of the greats’. He has a presence for sure.

“Luckily, I played well that day and so did the team, but I’ll never forget coming up against him for sure.”

Ronaldo found the target in that contest, but Spurs ran out 3-2 winners on the day.

Tanganga wenton make his competitive bow in a Carabao Cup clash with Colchester, before Jose Mourinho threw him in at a Premier League deep end during a top-flight debut against Liverpool in January.

The youngster fared admirably against the elite, earning himself more opportunities in the process, with the promising full-back helping to keep Mane quiet in a game the Reds won 1-0.

On facing a Senegalese star, Tanganga said: “The boss pulled me aside a couple of days before the game and said, ‘do you want to play at the weekend?’, and I was like, ‘well, yeah!’

“Even though I was nervous I obviously couldn’t say no – that’s what we train for.

“So before the game I was YouTubing Mane and basically scouting him.

“I was watching him twisting guys up and I was like, ‘this could be me, man’. So I was nervous, but I had a decent game and he didn’t embarrass me or anything.”