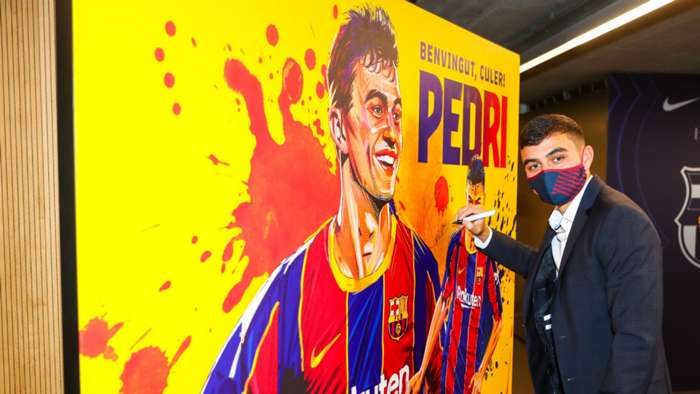 Pedri hopes Lionel Messi stays at Barcelona so he can "learn from the best", though thenew signinghas not ruled out a loan move for the 2020-21 season.

He was finally unveiled as a Barcelona playeron Thursday, however, with presidentJosepMaria Bartomeu and new sportingdirector Ramon Planes– who has replaced Eric Abidal in the role –present at the ceremony.

Pedri – who revealed heidolisesAndres Iniesta –is excited at the prospect of working alongsideMessi, provided the forward remains at CampNouamid continued speculation over his future.

"It's not every day you can sign for this club,"Pedrisaid."I'm really looking forward to doing great things, but the pressure is the worst a footballer can have. Youhave toget rid of it as soon as possible and replace it with excitement.

He added: "My idol has always been Andres Iniesta and now I want to learn from the best, which is Leo Messi."

As for his own situation, Pedri is planning for life at Barca but is also prepared for a temporary move away, aspell out on loan potentially offering him the chance to play regularly andaid his long-term development.

"The first option is to stay here and have fun with the best, although a transfer is not an option that I've ruled out," he admitted."You have to take pressure off from the first moment. You must have enthusiasm to enjoy each day and hope that everything goes well."

It has been a busy week for Bartomeu and Barca, who parted ways with Quique Setien after the humbling Champions League exit to Bayern Munich that has increased concerns Messi may leave.

Ronald Koeman has since been appointed as head coach, while presidential elections have also been moved forward to March 2021.