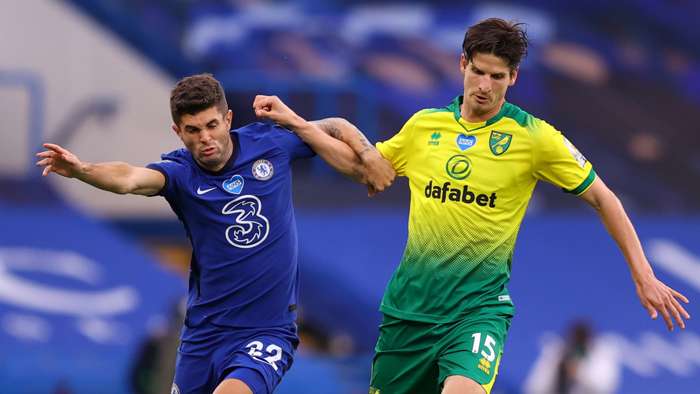 Christian Pulisic hasacknowledged that Premier League defenders are starting to become more physical with him as the Chelsea winger joked that he is adjusted to rough treatment from his time playing in CONCACAF matches with the U.S. men's national team.

After overcoming an initial adjustment period as well as a mid-season injury, Pulisic has become a vital part of the Chelsea team, drawing comparisons to former Chelsea wingerEden Hazard.

Chelsea boss Frank Lampard shied away from those comparisons, but was full of praise for the American's ability to score and create goals in recent weeks.

However, as Pulisic has found success, he hasalso found a response, with the 21-year-old the recipient of a number of fouls.

Over the last five games, Pulisic has been fouled 11 times and, when asked about the rough treatment on SiriusXM Radio, the American defender said that it's nothing new.

Pulisic is routinely a target of foul play in CONCACAF, a region notorious for opposition's harsh treatment of stars, and those experiences have helped prepare him for life in the Premier League.

"When players start to get to know you more, watch films, see how you play, then it is normal," Pulisic said of the physicality."With how I play it is normal, they do anything they can to take you off your game.

"It is a physical league, I have been kicked a few times in CONCACAF a few times well so I am used to it. I will be alright!"

Chelsea are at a vital point in their season, with the Blues pursuing a top-four place and the Champions League berth that comes with it.

Like all teams, Pulisic and Chelsea have faced a condensed schedule since the Premier League's restart, with the Blues also still competing in the FA Cup and Champions League.

As a result, theirschedule won't let up in the coming weeks and, although he admits this period has been gruelling, Pulisic says the potential rewards will all be worth it.

"It is tough right now, honestly, I am not used to this many games," he said."The schedule has been pretty crazy since we have been back. It is good, there’s not a lot of time to dwell after each game, it is just regeneration and we go for the next one so I have just been enjoying it.

He added: "I just try to take it game by game. You can’t think three games left and grind it out. You have to push for the next one, be ready for the next game, be ready and make sure my body is right. We have a big game coming up, multiple competitions and we want as many games as possible.

"Beat Man United and get to a final, get a top four spot.Bayern is not going to be easy by any means, but we are never going to give up and we want to go on in that competition as well."