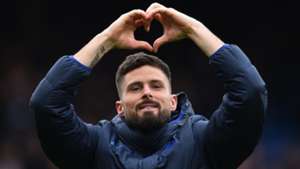 Olivier Giroud says he is open to staying at Chelsea beyond the end of the season despite having come close to making a January move away from the club.

Inter had agreed a contract with the Blues striker, with Lazio and Tottenham having also expressed an interest in the French World Cup winner.

Chelsea ultimately opted to keep Giroud after failing to sign a forward in January, with Ajax winger Hakim Ziyech set to sign in a ?37 million (EUR42m/$47m)in the summer.

The Blues had looked at bringing in Paris Saint-Germain striker Edinson Cavani and Napoli forward Dries Mertens, but Giroud is now back in the team and happy at Stamford Bridge.

"Yes, of course," Giroud replied when asked if he's happy to stay at Chelsea beyond the end of the season, when his current deal expires. "There are a few weeks [to go], games to win and maybe another trophy.

"And after I think I have two, three nice seasons in front of me. It's not the time to talk about contracts. But one more time I will take a decision when it comes.

"It's behind me. It was a tough month for me. I just spoke with the manager and I believed what he said, that I would get my chance and he has given me my chance.

"I have tried to give his confidence back on the pitch. I do my job the best that I can and I'm very happy to be back in the team. Of course, my confidence is better. The transfer window is behind me. I'm a Chelsea player, I'm happy here again and that's the most important thing."

Chelsea face Everton in the Premier League on Sunday knowing that they are only three points clear of fifth-placed Manchester United in the race for a top-four finish.

Giroud is likely to continue leading the line as Tammy Abraham continues to miss out through injury but he is hoping the England forward is available again soon to provide competition in attack.

"My confidence is getting higher and higher because I am playing more games," he added. "I don't know how long Tammy will be out for to be honest.

"When he comes back I will need him to be ready and then we can have good competition again, which will be good for the team. Everybody needs to be ready, to be good psychologically, to give everything for the team. I think that's what we did against Liverpool."

Lampard faces many big selection headaches ahead of the clash at Stamford Bridge with Kepa Arrizabalaga potentially replacing Willy Caballero in goal.

Giroud insists he sees similarities to his situation and that being experienced by Kepa at present, with the Spaniard having been dropped by Lampard after a string of inconsistent displays.

"I just told him I was happy for him (after Kepa's performance in the win over Liverpool in the FA Cup). He deserved to be man of the match because he saved us a few times. There is fair competition between him and Willy, they are both training very hard," Giroud said.

"His is situation was the same as mine - when you get the chance to be competitive and decisive for the team you have to take it.

"He is a tough man, but very quiet. He hasn't said anything [about being dropped]. We can understand his disappointment, but you have to respect the manager's decisions.

"You have to work hard to get back into the team. He has done well against Liverpool and it's a good answer. I'm always talking about the ' carre vert ', like we say in France, that's the reality of the pitch.

"Carre is square and vert is green. This is the reality of our job. You just need to be ready when the manager puts us on the pitch. I'm happy for us."