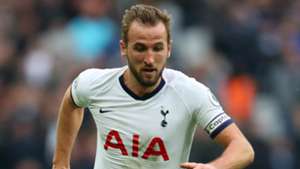 Tottenham striker Harry Kane has insisted he will only be out of action for a "few more weeks" and will be fully fit to participate in the European Championships later this year.

Kane has not played for Spurs since limping off the pitch with a hamstring injury during a New Year's Day defeat to Southampton.

The 26-year-old was forced to undergo surgery on the issue, leading to fears he would miss the remainder of the 2019-20 campaign, but Tottenham boss Jose Mourinho was able to deliver a positive update on his recovery last week.

The Portuguese tactician revealed that Kane is ahead of schedule with his rehabilitation, with ex-Spurs manager Harry Redknapp reacting to the news by predicting he can fire the team into the Premier League's top four once he returns.

England had also been sweating on the availability of their captain, but Kane is hoping to be back in the first-team fold at Spurs by April and confident of being ready for the start of Euro 2020 in June.

"In my head, I am definitely at the Euros," he told the Evening Standard.

"Unless something pretty drastic happens between now and then, I'll be there. I'm still not back training with the first team, but I'm working hard in the gym, I'm getting stronger all the time.

"We're talking a few more weeks, and I'll be playing again. I don't want to make a prediction for which game I might be back, but I am hoping somewhere between the start and the middle of April."

The Three Lions learned their UEFA Nations League fate at the group-stage draw in Amsterdam on Tuesday, and were placed in League A's second group alongside Belgium, Denmark and Iceland.

Gareth Southgate was in attendance and took some time out to comment on Kane's progress, praising the forward for following his recovery programme to the "absolute letter".

"As far as I am concerned he's on schedule, with all the information that we've had we know he is progressing well," the England boss said.

"He'll give himself the best chance of being fit by following everything to the absolute letter. I am not surprised by that news and of course, it is good to hear."