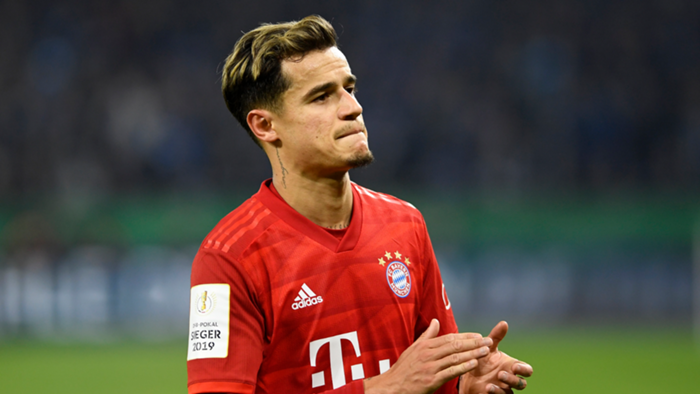 Philippe Coutinho says he is "fully focused" on winning the Champions League with Bayern, and insists that he hasn't yet thought about his future amid links with Arsenal.

The 28-year-old scored twice against his parent club Barcelona in a stunning 8-2 quarter-final victory last week, and also featured from the bench as Hansi Flick's side beat Lyon 3-0in a last-four clash on Wednesday.

Bayern have already passed up the chance to sign Coutinho permanently at the end of his season-long loan, which means he is due toreturn to Camp Nou ahead of the 2020-21 campaign.

The Brazilian is still tied to the Blaugrana until 2023, however, it has been suggested that the club will cash in on the playmaker rather than re-integrate him into the squad.

Coutinho struggled to live up to his £142 ($187m) price tag after joining Barca from Liverpool in January 2018, and is now being tipped to return to the Premier League after a mixed year at Bayern.

Arsenal are reportedly keen on bringing in the former Reds talisman, while Manchester United are Chelsea have also been credited with an interest in his services.

Coutinho isn't looking past this weekend's showpiece event though, as he told Esporte Interativo when quizzed on rumours of a possible transfer after Bayern's win against Lyon:"My mind is fully focused on the competition. It’s a unique opportunity for us. I’m very happy to be in the Champions League final.

"On my future, I haven’t thought about it because I’m only thinking about the final."

The Barca loanee will come face to face with fellow countryman Neymar in the Champions League final, and is well aware of the threat the world's most expensive player will pose Flick's Bayern.

"We haven’t spoken yet because of the match. I’m sure he is focused on his team and me on mine," said Coutinho.

"PSG is a very strong side with really quick forwards. I don’t even need to say how great of a player Neymar is because the whole world knows it.