'I have no difficulties with Messi, I see his winning character' - Koeman rejects Setien's view on Barcelona superstar
Match

'I have no difficulties with Messi, I see his winning character' - Koeman rejects Setien's view on Barcelona superstar 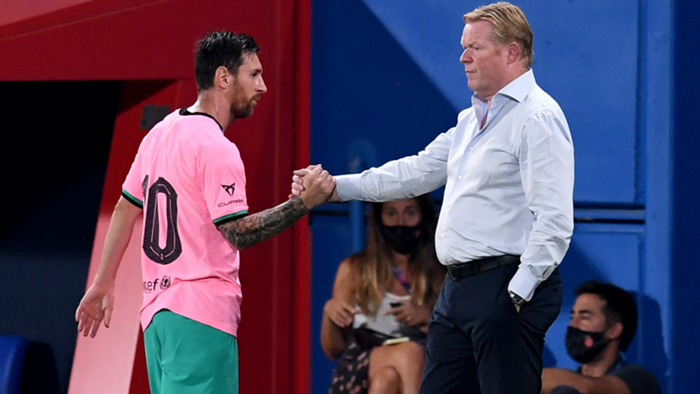 Lionel Messi always shows his "ambition" and "winning character" and is not difficult to manage, according to Ronald Koeman, who has rejected Quique Setien's view on the Barcelona superstar.

"It's something inherent in many athletes that can be seen in the Michael Jordan documentary 'The Last Dance'. You see things you don't expect."

Setien was dismissed in the wake of the humiliating 8-2 defeat to Bayern Munich in last season's Champions League quarter-finals, with Koeman replacing the deposed coach.

The Dutchman retained the services of Messi in his squad despite a very public and ugly transfer saga involving the Barca captain.

But Koeman insists he does not find it tricky managing a player considered by many as the best of all time.

"I respect all opinions. For me Leo is the best player in the world, I am seeing his ambition and winning character," he told a news conference ahead of Wednesday's Champions League clash with Dynamo Kiev at Camp Nou.

"I have no difficulties to lead him. He is the captain and I talk to him every week. I see things differently from Setien and I do not agree with his opinion."

Despite being in the infancy of his tenure, there is already some pressure on Koeman – not least because of the resignation of president Josep Maria Bartomeu.

Barca have also only taken two points from their past four La Liga matches, a run that included a 3-1 reverse to Real Madrid in the Clasico and a 1-1 draw at Deportivo Alaves, who finished Saturday's encounter with 10 men.

In La Liga this season, Barca have scored 10 goals, created 58 chances and 13 big chances in six games. Madrid, as a comparison, have 13, 81 and 25 across the metrics.

Koeman insists his side are trying to play in a positive way and does not pay too much attention to external noise about his long-term future.

"My future at Barcelona is not the most important thing. You have to live day by day and try to win the games," he added.

"We ask for peace of mind and time because we are changing a lot of things. In La LIga we have been good, but we have not gotten good results. In the rest I have no influence. I will do my best to stay a long time.

"We are the team that creates the most chances per game. The image we are showing is positive and we will continue on this path although we know that in LaLiga you have to win more games."

Barca's clash with Dynamo has been hit by several positive results for coronavirus returned by the visitors.

But Koeman warned his side against complacency if the match goes ahead, especially considering Shakhtar Donetsk had similar issues prior to beating Madrid in matchday one.

"We know that Dynamo has problems due to COVID. They have done a test this morning, we have to wait for the results this afternoon," he added.

"I don't know the UEFA rules. We have to prepare for the game and hopefully we can play it.

"The COVID issue is not easy. AtDynamo there are many players and that influences their quality, but there were also casualties at Shakhtar and they won against Madrid.