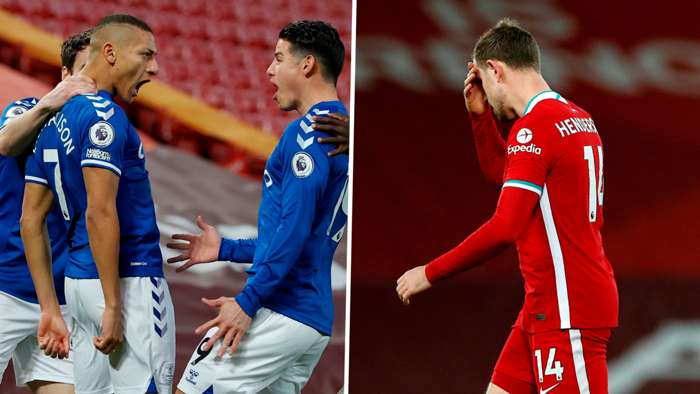 The Reds’ nightmare season reached a new low on Saturday as they slid to their first defeat to local rivals Everton in more than a decade, and their first derby defeat at Anfield since October 1999.

Richarlison’s early goal, followed by Gylfi Sigurdsson’s late penalty, did the damage for Carlo Ancelotti’s side, who move level on points with their neighbours – with a game in hand– courtesy of a2-0 win.

For Liverpool, it was a fourth straight home league defeat – the first time that has happened since 1923. Having initially sought to defend the title they won so spectacularly last season, they can now see their hopes of even a top-four finish dwindling. With just 13 league games remaining, they are very much up against it.

Their misery was compounded here by yet another injury, and yet more defensive disruption, with Jordan Henderson forced off just half an hour in. That’s all three of their most experienced centre-backs sidelined now, as well as the two midfielders who were movedbackto replace them.

It meant that Ozan Kabak and Nat Phillips became the 18th different centre-back pairing to play for Klopp this season, and the 14th in 25 Premier League matches.

Klopp said on Monday that he doesn’t need to check with his medical staff when there’s a new problem, as he knows it’ll be a defender, and his words proved prophetic here.

Not that Everton will care for their misfortune, of course. The Blues’ stellar away form continues under Ancelotti. They have collected 26 of their 40 league points on the road. Were it not for their profligacy at Goodison Park, they would be certainties for Champions League qualification.

They led early here, Richarlison bright as a button to get in behind Kabak and Henderson, reaching James Rodriguez’s astute pass to finish in style. It was the first time they’d led in a derby at Anfield since January 2011, and they would not relinquish their advantage.

They could reflect on solid performances from Ben Godfrey, Michael Keane and Mason Holgate in defence, and were indebted to goalkeeper Jordan Pickford, who kept Liverpool at bay with a string of saves once the Toffees were in front.

Pickford, the villain when the sides met at Goodison in October, was spot on here, denying Henderson, Trent Alexander-Arnold, Mo Salah and Gini Wijnaldum. Liverpool dominated for long periods, especially in the second half, but could find no way past England’s No.1.

It was left to Sigurdsson to rub salt in red wounds, rolling home from the spot after Alexander-Arnold had been adjudged to have fouled substitute Dominic Calvert-Lewin.It looked a harsh award, but Liverpool will simply feel it is indicative of their luck this season.

Everton’s celebrations at the final whistle told their own story. They’ve waited a long time for this.

Kevin Campbell, the last man to score a winner here for the Blues, is 51 now, but he can finally pass the baton on. Ancelotti has delivered what David Moyes, Roberto Martinez, Ronald Koeman, Sam Allardyce and Marco Silva could not.

For Liverpool, the nightmare continues. They’ll be glad to see the back of 2020-21, make no mistake about that.