'I hated playing against them!' - Arsenal's Foord welcomes Catley & Williams ahead of PSG clash

'I hated playing against them!' - Arsenal's Foord welcomes Catley & Williams ahead of PSG clash 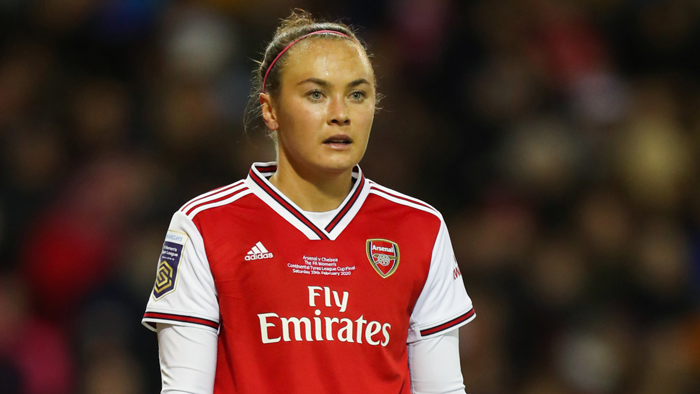 Among them are Steph Catley and Lydia Williams, both team-mates of Foord’s at international level with Australia, giving her two familiar faces to work withas she continues to settle into a club that she herself only joined in January.

“I've been playing with Steph for 10 years. We've known each other for a very long time, but in a club environment, you see them day in day out,” she said.

“I know them pretty good as footballers, but now it's just to get to know them as people. That's something I haven't really had the chance to do.

“It's just good to have them around. They are always two players that I hated playing against in clubs so it's nice to have them finally on my team.

“There's a lot of us Aussies out here now, I don’t know if there’s too many more to come! If they’re not here in the UK, they’re here in Europe. I think it's good.

“For the last few years we've been doing seasons back-to-back with Australia and America and I think it's just come around the same time that for all of us it’s time for a change.

“With European football, with the level it’s at and the English league obviously making massive strides as well, I think that was very attractive to us.

“It was a matter of time before I was going to come, I just didn't know when it felt right. This year felt like the right move. Being here now, it definitely feels like that more.”

Being the first of the Matildas to arrive at Arsenal though, it wasn’t a familiar face that helped Foord settle at the beginning of the year.

When the lockdown period in England beckoned, the 25-year-old moved in with midfielder Lia Walti and the pair quickly struck up a great friendship.

“Lia helped me massively coming to the team and I'm very fortunate and thankful,” she said.

“Because you could only train with your household, just to have someone to train with, then moving forward just to have company, because that would have been a very, very long time to be by yourself.

“Obviously I've got to know her and then a lot of the girls more on a personal level through her as well.

“That definitely helped me integrate into the team.”

On the pitch, it’s been months since any competitive action, but Arsenal have been preparing for this game as best they can through a string of friendlies.

With Williams and Catley having arrived in the last few months, as well as Wolfsburg defender Noelle Maritz and midfielder Malin Gut, Foord is confident that those games have helped the newcomers settle into the team quickly and understand Joe Montemurro’s style of play.

“It's been massive, I think, for myself, but also the new players as well,” she said.

“There's quite a few of us so it's been good to get some minutes under our belt.

“We’re limited with time and with a lot of new players that does take time, but it is what it is. It's been good to get minutes, to have sessions and a good build up to get a little bit more familiar.