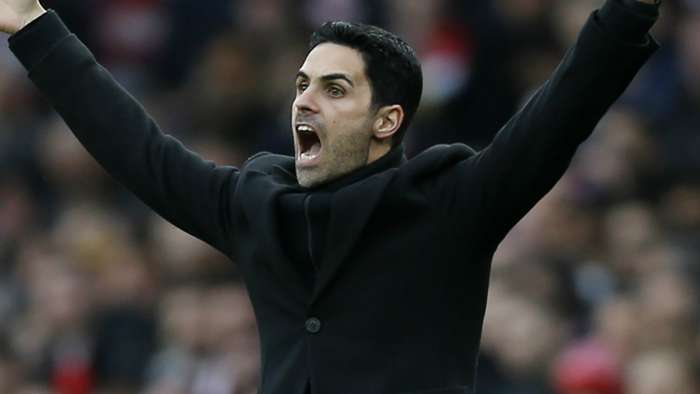 Arsenal coach Mikel Arteta has admitted he is unsure of the rules regarding VAR after Eddie Nketiah was sent off during the 1-1 draw against Leicester on Tuesday.

Nketiah was shown a red card while the hosts were leading 1-0 and just four minutes after he came off the bench.

Referee Chris Kavanagh consulted VAR before dismissing the forward for a rough challenge on James Justinwith just 15 minutes left in the Premier League encounter and the Foxes came back to rescue a point through a late Jamie Vardy goal.

VAR’s role in the decision perplexed the Gunners boss, who was proud of his side despite the draw.

"I don't understand the rules. I never see a referee check any of the images. But I can do nothing now, it is the rules," he told Sky Sports.

"We lost two points, we lost Eddie and we will see now for how many games. But we go to Spurs now and try to win three points."

He added:"I am extremely proud of our team, the way we played against this kind of opposition. We should have been three or four-nil up. With the red card you have to know he is a young kid. Leicester should play with 10 men after 42 minutes. For a challenge between the 40th and 45th minute.

"They played tremendously well. The recovery time is difficult but you can see the effort the players are putting in. I am extremely proud of the players. We have to learn as well. When you have this kind of opposition and you are on top you have to kill them when you can."

Arsenal goalkeeper Emiliano Martinez says the incident was the turning point in the game, as he believes his side should have taken the three points.

"100% we should have won,” he told BBC Sport. “Before Eddie Nketiah got sent off we played an outstanding game and should have scored two or three goals. We defended well and we’ll have to be happy with a draw, we wanted to win.

"I know Eddie, he is not an aggressive player. He slipped and did not want to injure him and the red card is harsh. We know Eddie and we know he is a nice guy,

"Somtimes you score, sometimes you don't. Before the red card we looked solid and I did not have to make a save in the second half.

"I know I am going to concede goals but hopefully I can keep more clean sheets for this club. That is one thing we have to work on and disappointed to concede at the end."