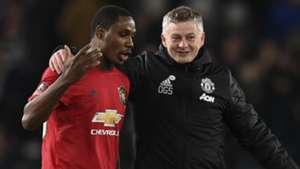 Odion Ighalo has declared he doesn't care what anyone says, willing he has the belief of his team-mates, manager and fans after scoring a brace in Manchester United's 3-0 win over Derby County in the FA Cup fifth round.

After Luke Shaw opened the scoring in the 33rd minute, Ighalo fired home his side's second in the 41st minute before wrapping up the victory with another goal in the 70th minute.

The 30-year-old, who only joined the Red Devils on deadline day from Shanghai Shenhua, has now scored three goals across his first six appearances for a club he grew up supporting.

While some initially questioned United's decision to sign Ighalo, he's quickly proven his worth and declared he couldn't care less what pundits may be saying about him.

"I am happy. I want to congratulate the team for a hard fought game," Ighalo told BT Sport post-match.

Ighalo's arrival at Old Trafford has coincided with a good run of form for the Red Devils with the club yet to lose when the Nigerian's been involved and winning both of their games when he's started.

It's the stuff of fairytales for Ighalo, who is determined not be overawed by his situation as he looks to pay back Ole Gunnar Solskjaer's faith in him.

"I am happy to be around this game team, great lads and great manager, I am happy and we are working hard," Ighalo told BBC Sport.

"We know we need to win the game to go through to do important things this season and end the season well. The start was not the best we can do but after 20-25 minutes we got into the game.

"I used my strength and I am happy the ball went in. For the second, they blocked it then there is nothing I can do apart from shoot.

"I had another shot but did not connect well but the most important thing is that we won. We want to keep the momentum going and make sure we do great this season."

Manchester United will now face Norwich City in the FA Cup quarter-finals on March 21 but next host Manchester City at Old Trafford in the Premier League on Sunday.