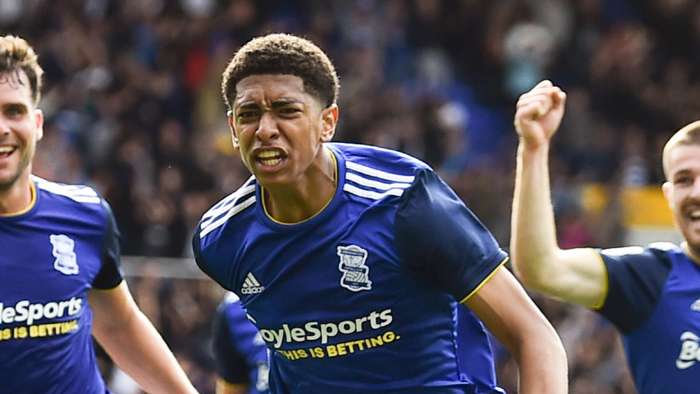 Jude Bellingham expressed his love for Birmingham City after the tearful teenage sensation played his last game for the Championship outfit ahead of his move to Borussia Dortmund.

The 17-year-old stepped out in a Birmingham jersey for the final time in a 3-1 Championship defeat to visiting Derby County midweek.

Bellingham was overcome with emotion post-match at St Andrew's, where he emerged from his boyhood club's youth system last year.

"I tried my best to hide it but sometimes it's difficult," Bellingham said. "I love the club, I am a massive fan of the club.

"I've been coming here since I was seven, not just playing in the academy.

"So just to get a little bit of time out there on my own and with my little brother, mum and dad meant the world to us.

"We've shed a few tears and I am really devastated about how it's finished but at the same time I am optimistic for the future and looking forward to that."

He added: "I just want to say thank you so much for the season, for the way you've been with me, the way you've pushed me on, the little bit extra that you've given me.

"Whatever happens, I'm always a Blue. As I've said, this is my club. I love the club to bits. Id' die for this club and I hope I showed that in the performances when I was here.

"I hope I was fun to watch, fun to interact with and stuff because that's what I wanted to do. I wanted to bridge the gap between the players and the fans that had maybe been there the last few years while there hadn't been an academy graduate.

"To do that and take the opportunity that I've been given, it's something I've had to do, but I'll only look back on Birmingham City with love and fondmemories."