'I always liked him" - Arteta open to Mkhitaryan return 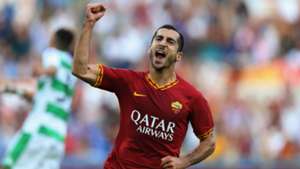 Henrikh Mkhitaryan could still have a future at Arsenal under Mikel Arteta.

Arsenal's head coach says it is a 'possibility' that the Armenia international will return and bolster his options in attacking midfield next season following his loan spell in Italy.

Mkhitaryan, who arrived at Arsenal in January 2018 as part of the swap deal that saw Alexis Sanchez move to Manchester United, started the campaign in north London and featured in three of the club's first four Premier League games.

But just 24 hours after coming off the bench during the 2-2 draw with Spurs in August, Arsenal agreed to let the 31-year-old join Roma until the end of the season.

And Mkhitaryan has gone on to be a big success in the Italian capital, scoring six goals and registering three assists in just 17 appearances in all competitions.

Meanwhile Arsenal have struggled for goals and creativity from attacking midfield positions, especially in the central areas where Mesut Ozil and Dani Ceballos have scored just two goals between them this season.

And so Arteta has not ruled out using Mkhitaryan once his spell in Italy has come to an end.

"I always liked him," said Arsenal's head coach. "He is the kind of player who can fit in any team when he is at his best, he needs to do it consistently and that's what we need to assess.

"It's a possibility that we have and will consider."

Since leaving Arsenal, Mkhitaryan has openly admitted his disappointment at the way he was treated by the Gunners prior to his move to Roma.

The former Borussia Dortmund star claimed assurances he had been given in the summer about his role in the side had not come to fruition.

"I knew I would be more appreciated by Roma than by Arsenal at the time," Mkhitaryan told Vivaro News.

"At the beginning of the season they made promises to me, but after two or three weeks everything was different. They treated me differently."

But Unai Emery was in charge while Mkhitaryan was still at the club and Arteta has shown since he arrived in December that players who had been frozen out by the previous coach, would be given an opportunity to impress under him.

Shkodran Mustafi has benefited from that, while Mesut Ozil has also now regained his place as a near ever present under the 37-year-old.

And Arteta has now opened the door to Mkhitaryan - who has a contract until 2021 - also being given another chance.

"We monitor all the players we have on loan," said the Spaniard. "It's our responsibility.

"Miki is doing really well in recent games. We know the player he's been, we know his past, and we need to have all the information to make the right decision."