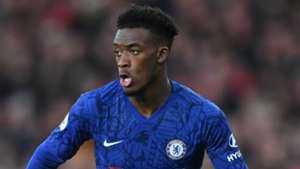 Callum Hudson-Odoi has handed Chelsea a fresh injury headache, after suffering a setback in training, but Christian Pulisic is closing in on a return to action.

Frank Lampard delivered mixed news on the fitness front when looking ahead to a Premier League meeting with Everton on Sunday.

The Blues have seen senior stars pick up untimely knocks with alarming regularity this season.

Hudson-Odoi is among those to have spent far longer on the treatment table in 2019-20 than he would have liked.

The England international finds himself back there at present, with Lampard revealing that the 19-year-old has been ruled out of his plans once again.

He told reporters: "Hudson-Odoi had a re-injury and is having a scan later today.

"It's tough for him. He wasn't rushed back. He did it training back with us. It's another injury for us.

"It hasn't been spoken about it that much but we have had the worst injury list. We are working against that to try and get the best results."

Mateo Kovacic is another set to definitely miss out against the Toffees, while Willian faces a race against time to put himself in contention for a place in the matchday squad.

Lampard added: "Kovacic not fit and Willian we will assess him, he is a question mark for the weekend."

There was better news on Tammy Abraham, who is making positive progress in his recovery from an ankle problem.

Quizzed on whether he expects to his 15-goal top scorer back by the end of the month, Lampard said: "I hope so, he's not training with us yet."

Two men who are back on the training field and forcing their way into the frame for competitive minutes are United States international Pulisic and England playmaker Ruben Loftus-Cheek.

The latter has seen no action this season, while the former has been absent since New Year's Day.

Lampard said of two creative influences: "We had an in-house game which Christian and Loftus-Cheek played.

"I just watched it and they are trying to find match fitness."

With so many players ruled out, the likes of Olivier Giroud have come back into favour of late.

The France international striker appeared destined to leave Stamford Bridge in January, but he is enjoying his football again and suggested that he could extend a contract which is due to expire in the summer.

"I'm not jumping ahead to the summer. We have a big job to do now," Lampard said when asked if he expected Giroud to pen fresh terms.