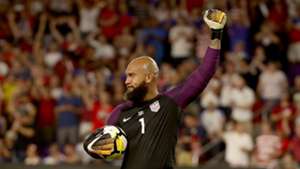 Longtime U.S. men's national team goalkeeper Tim Howard has signed on as a player for the club he owns, Memphis 901 FC.

In December 2019, Howard announced that he would be taking over as general manager of Memphis 901, a USL side he helped launch in his hometown in 2018.

And now, in addition to his roles as GM and minority owner, Howard will sign on as a player with the second-year club.

"Since my retirement in October, my obsession for football has grown. The desire to win continues to drive me. I love to play and I love to compete, this gives me the opportunity to do both," he said in a statement.

He added: "I've made a commitment to the City and people of Memphis to build a perennial playoff team. One whose goal continues to be lifting the Eastern Conference trophy and ultimately bringing the USL Cup to AutoZone Park."

Howard began his career with the MetroStars before heading to England, where he initially broke through with Manchester United.

After a loan stint with Everton, Howard signed with the Toffees permanently in 2007 and went on to become a stalwart at Goodison Park.

He featured for Everton until joining the Rapids in 2016, making 414 appearances, good for the 13th-most in the club's history.

Internationally, Howard earned 121 caps for the U.S. men's national team, making him the most capped goalkeeper in team history.

"As both an owner and our Sporting Director, Tim's deep desire to win, driven by outworking the competition, is what has come to define 901 FC's culture," said principal owner Peter B. Freund. "Today's announcement, that Tim will represent the city of Memphis as our goalkeeper, shouldn't come as a surprise to anyone who understands the fire that still burns inside of him."

"When he's in the locker room as a player, he will act as a player," added head coach Tim Mulqueen. "His focus is only going to be on winning. There will be very clear lines that the players will recognize.