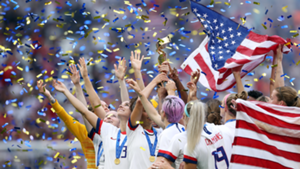 For all of the strengths of the U.S. women's national team, the program's biggest advantage is its player pool.

Many of the world's top national teams feature a handful of talented players. Many of the best teams field a starting XI of world-class stars. The U.S., though, has routinely loaded up and reloaded with legends being replaced by legends and World Cup winners giving way to the next generation of world-beaters.

So how does the USWNT develop its next generation of World Cup winners? How do you go about cultivating a program full of stars as the rest of the world looks on and improves? Perhaps most importantly, how do you continue to innovate from the top while everyone else waits for you to slip?

Those are questions the U.S. faces right now, and how they answer those questions will be the difference between continued dominance and falling back to the pack.

For years, it was easy to see those answers. By most metrics, the U.S. have been at the forefront of the women's game for years, and they have the success to prove it. But it's fair to say that, in recent years, several countries have begun to catch up when it comes to women's soccer.

Countries like France, the Netherlands, Spain, Japan, Germany and England have put together top programs with an increased focus on youth development. For years, the U.S. played in their own little world, but that world is shrinking each and every year.

That fact is evidenced by the USWNT's recent performances at the youth level. Both the Under-20 and U-17 teams crashed out of their respective World Cups in the group stages in 2018 and, although youth results are not the be all and end all, there is reason to be concerned. The current USWNT, the one that triumphed in France last summer, featured 11 players over the age of 30 and just three under the age of 25.

Because of those concerns, the USWNT turned to Kate Markgraf as general manager, tasking her with a number of key jobs in the process.

The first was hiring a coach to replace Jill Ellis, which she did with the appointment of Vlatko Andonovski. The second was refining and enhancing the youth programs as the USWNT would need a brand new foundation from the bottom level of the youth setup.

"2020 will be a success for me if I help build -- collectively with the group of coaches -- an infrastructure that can help enhance player development, identification and scouting mechanisms," Markgraf told The Athletic in January. "That's really it: can I do those three? And at every level of the pyramid? Whether it's pro, whether it's national teams, whether it's having the discussions at the youth levels.

"How do we figure this (youth) piece out? It's more fractured, and it's always going to be fractured, to be honest, with the pay-to-play model, but how do we make it where it's not as fractured? How do we mitigate it as much as possible, where we can get better player development? So. That's my goal. A chance to build an aligned infrastructure. Not that it wasn't before, but a lot of it left when everyone left, so how can we do it so it's not person dependent? So if, for example, a coach leaves, we're not starting from scratch with all of that intellectual property, all of the information is up on one spot."

As Markgraf alluded to, the American youth soccer system is unlike any in the world. It's an issue that has hindered progress of the U.S. men's national team for many years, with pay-to-play clubs and academies building towards the college game and, eventually, the draft or a homegrown deal.

By and large, that is still the path for those in the USWNT youth system. Of the 20 players on the most recent U-20 roster, only two, Portland Thorns star Sophia Smith and Koln midfielder Talia DellaPeruta, were professionals. The college game, for better or worse, is still a vital part of talent development in this country.

The good news is that, by and large, that system has worked just fine. Virtually every major USWNT star has played the college game. However, there are key flaws. The shortened fall season limits practice and game time that would be valuable to a growing player. However, in a world where women are generally not paid the multimillions that their male counterparts make, education is a key backup plan.

Emily Fox, still a college star for North Carolina, has earned three senior caps already and competed for a World Cup roster spot. Meanwhile, last year the USWNT held a training camp with a number of top stars of the college game. That was further evidence that the connection is still there and that figuring out how to guide players from school to the professional game is still a focus.

To overcome the flaws of the college system and a pay-to-play model that limits participation at the lower levels, Markgraf and U.S. Soccer have placed an increased focus on their youth teams. The big move so far was the hiring of U-20 boss Laura Harvey, who has managed Arsenal, the then-named Seattle Reign FC and Utah Royals FC. The aim? To bring more professionalism to the youth levels and mold a promising group of young stars.

That team currently features a number of future USWNT stars. Smith has the second-most U-20 goals in program history, behind longtime USWNT regular Sydney Leroux, while Brianna Pinto has already joined a USWNT camp despite being just 19. The group went on to breeze through Concacaf's U-20 Championships in February and March, scoring 40 goals, while conceding just one. Pinto scored nine of those goals while 18-year-old UCLA star Mia Fishel fired 13 to win the tournament's Golden Ball. A total of 11 players scored at least one goal while 13 provided an assist.

"I just really liked [Laura Harvey's] approach," Pinto told TopDrawerSoccer. "She took a humble perspective where she introduced herself as the new person in our room. Some of us have been playing together on and off for the last year or so - with camps with Mark (Carr) in the past. She used the first couple of days of our January camp to see how our youth (national team) system works, to see how we interact with the support staff. Once she got comfortable and had a chance to speak with the assistant coaches, they made their plan really detailed because they wanted everyone on the same page."

Added Markgraf in January: "That level of tactical sophistication is something that, for these players coming from college, it is going to ramp them up. I look at that as the perfect bridge into our 23s, and then to our senior team and the pro league, so that these 20s can go and actually get a spot on a NWSL team, hopefully. So, to me, it's an acceleration of their development in a different capacity, because they're going to be exposed. It is a balance, it's a balance in the cycle."

The U-23s, meanwhile, show that there is an ongoing shift in what happens after the college level. Every single member of the 2019 USWNT World Cup squad plied their trade in the NWSL. September's U.S. U-23 squad, meanwhile, had nine of its 23 players playing abroad. Among those players were several pegged as future stars, including Hailie Mace and Alana Cook. They aren't the first Americans to go abroad, as many familiar faces and USWNT regulars have played overseas at one point or another, but it does show that the NWSL isn't the logical next step for each and every player.

You can rely on those familiar faces for a while, and you can count on the USWNT's biggest stars longer than most, but, at some point, you need to develop that next generation. It can't be all at once, as you risk alienating legends and rushing youngsters into situations they aren't ready for. It also can't be too gradual, as the penalty of holding on too long is failure that could last a generation. It's a fine line, one that, at least to date, this program has toed better than most.

That's a line that Andonovski faces right now. Even with the Olympics postponed, the U.S. can likely count on the likes of Megan Rapinoe and Carli Lloyd to give them one more run. After that, Rose Lavelle and Julie Ertz can carry the torch. But the key is making this less about names and more about a system, one that churns out Rapinoes, Lloyds, Lavelles and Ertzs in each and every generation.

And that process moves fast. When the U.S. won the World Cup in 2015, Lavelle was a junior at Wisconsin. Mallory Pugh and Tierna Davidson were 17 years old and featuring for the U.S. U-20s while Abby Dahlkemper was an NWSL rookie. In 2019, they were all among the squad that sealed glory in France.

By the time 2023 rolls around, its a safe bet to assume that the likes of Pinto, Smith, Fox and Fishel will be pushing for their own spots, and there will be others as well. It's a system that has churned out star after star with no sign of stopping. With Markgraf's tweaks, Smith's professionalism, Andonovski's leadership and a country full of young players inspired by the USWNT's domination, it seems that next generation is being groomed for success.