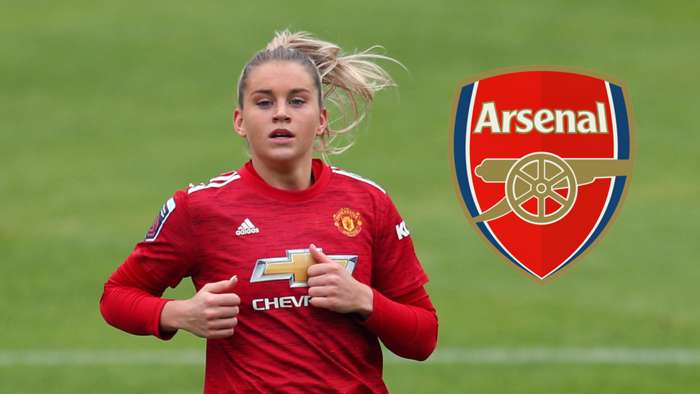 When Arsenal travel to Manchester United this weekend, England star Alessia Russo will be one of the many attacking talents the visitors will be tasked with keeping quiet. Things could have been much different, though.

“We had a very good look at her at the start of this year and I had many conversations with her. She was obviously very interested,” Arsenal manager Joe Montemurro revealed this week.

However, in what has been a crazy year on and off the pitch because of the coronavirus outbreak, the confusion around America’s college sports, and whether they would resume, meant transfer decisions had to be made at the very last minute.

“It was bound to start, then it stopped. Then, they started it again, and then, they canned it. Then, all of a sudden, there was a big rush to get players signed and players sorted,” Montemurro explained.

“Unfortunately, with Alessia, we just weren't in a position at the time to bring her in and she obviously found a solution at United. All credit to her, she's doing very well.”

Russo's move toUnited created not only a real buzz at her new club, but throughout the Women’s Super League.

The Chelsea academy graduate was highly rated when she moved to the United States back in 2017, having shone in England’s youth ranks and during a brief spell at Brighton, where she scored three goals in seven league games.

Across the Atlantic, she was part of an incredibly successful North Carolina Tar Heels team that topped the Atlantic Coast Conference (ACC) twice, won the ACC Championship twice and also reached the NCAA Division I College Cup final in both 2018 and 2019.

To have teams like Arsenal and United interested in her as she looked atreturning to England was further confirmation of the wonderful progress she had made.

“She’s probably even a little bit quicker than we anticipated,” Stoney said, shortly after her arrival. “She's very direct, which we knew anyway, which is one of the reasons we were bringing her in, and just a fantastic character.

“She's really impressed me since she's come in. She's added loads to our attack.”

Though the first camp featured only an in-house friendly, and the second saw Russo have to withdraw through injury, there is no doubt that she will start adding to her single senior cap sooner rather than later.

A versatile attacker who can play anywhere across the front line, her development is only going to be aided by United's addition of two experienced signings from the United States.

The pair have only signed for a year, but it's already clear that their presence will be hugely beneficial for a young talent like Russo.

During United’s fixture with Brighton earlier this season, Press spent part of the half-time interval giving advice and tips to Russo based on what she had seen in the first half while watching on from the bench.

Sure enough, Russo went out after the break and scored her first goal of the season.

“I think that that shows the strength of Press as a person, a character, but also how much Alessia is going to pick up over the next year,” Stoney said.

“She has something different. She has very good technique, very good football understanding in terms of her positioning,” Montemurro added.

“She's obviously done very, very well and, like three or four of the players in United’s top third, we have to be very, very careful.”