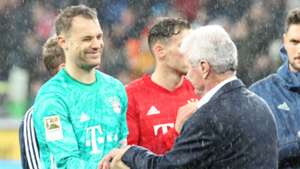 Hoffenheim owner Dietmar Hopp has hit back against protests against his ownership of the Bundesliga club, saying he will not stop attending matches.

Saturday's 6-0 home defeat to Bayern Munich was halted during the second half after visiting fans held up banners insulting Hopp.

After the referee took the players off the pitch to wait for the banners' removal following appeals from the Bayern players, the two teams saw out the rest of the match by passing the ball among themselves as a show of solidarity towards Hopp .

Bayern head coach Hansi Flick and chairman Karl-Heinz Rummenigge apologised after the match for what they described as "ugly" and shameful protests.

Speaking to Sport1 , Hopp said: "If I remotely knew what these idiots wanted from me, it would be all the easier for me to understand.

"I can't explain why they are so hostile towards me. It reminds me of very dark times.

"Why shouldn't I go to the stadium anymore? The people who do this are the ones who should stay away."

In a statement on Bayern's official website , Hainer said: "All of us at FC Bayern are still stunned by yesterday's incidents in Hoffenheim. We are ashamed of the behaviour of a few so-called "fans" in the FC Bayern terrace and seating area during the game.

"Dietmar Hopp was insulted in the worst imaginable way by a few idiots with a banner. He was defamed, from a distance, anonymously, namelessly, and in a cowardly way. The events of yesterday were an absolute low point.

"It is high time to act decisively. Racism, exclusion, insults and discrimination of any kind and against anyone must stop now. This is also the opinion of the overwhelming majority of FC Bayern fans.

"They are expressing their incomprehension and indignation via all conceivable online platforms, on social media and in numerous emails to us. Our fans stand together, football stands together, against hate, against intolerance, against defamation."

There were similar scenes in Borussia Dortmund's 1-0 win over Freiburg, when a tannoy announcement called for Dortmund fans to cease anti-Hopp chants.

The apparent anger from supporters stems from frustration with the way Hoffenheim have risen through the German leagues to become a major player in the Bundesliga thanks to Hopp's significant financial backing.

In December 2014, Hopp was granted an exemption from German football's '50+1' rule, which states that members - who are almost certainly fans - must control 50 per cent of a club's shares with voting rights, thereby preventing external parties from buying controlling stakes.

Exemptions can be granted for investors who can prove they have provided large-scale, consistent support for a club over 20 years. Bayer Leverkusen - founded by workers of pharmaceutical giant Bayer in 1904 - and Wolfsburg, who are affiliated with Volkswagen, are two such examples.

The German Football League (DFL) said at the time that a key part of their decision to grant Hopp's exemption was that he "has provided considerable financial support for both the professional as well as the amateur teams of the club".