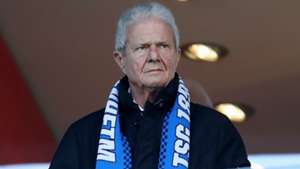 Hoffenheim owner Dietmar Hopp claims a coronavirus vaccine "could be available" by the autumn, providing human trials go ahead as scheduled in the coming months.

Hopp has found himself in the German football headlines since the turn of the year, with supporters publicly protesting against his influence behind the scenes in the Bundesliga.

The 79-year-old is the majority shareholder at Hoffenheim with a 96 per cent stake in the club, and his finances have helped the team go from the lower reaches of German football to Bundesliga regulars.

Hoffenheim's recent home fixture against Bayern Munich was called to a halt on two occasions, as staff removed banners taking aim at Hopp, one of which read: "son of a b*tch."

German fans believe that clubs operating outside of the "50-1" rule which allows supporters to retain a stake in their clubs are ruining modern football, with RB Leipzig also viewed as a "plastic" organisation.

The Bundesliga has faced major disruptions for far more urgent concerns recently, with the coronavirus outbreak causing delays to the 2019-20 campaign.

Hopp is also the main investor in biopharmaceutical company CureVac, who are currently working on a vaccine to combat Covid-19.

The Hoffenheim chief has revealed that CureVac have been on the frontlines of the crisis since the turn of the year, and he insists that a breakthrough could be made in the next six to seven months.

When asked how long it will be before a vaccine is released to the public, Hopp told Sport1: "That depends on the Paul-Ehrlich-Institute (the german institute for vaccines).

"It has to be tested first with animals and then with human beings. But I think it could be available in autumn at the time when possibly the next wave of infections will come."

The potential for a vaccine has already begun to cause controversy, however, with some sections of the German media claiming United States president Donald Trump is keen to buy any immunisation that is produced.

Hopp, however, insists that the vaccine will not be privatised, saying: "If we succeed soon to develop an effective vaccine against the coronavirus then this vaccine should reach, protect and help people all over the world and not only in one region."

UEFA officials are due to convene on Tuesday to discuss how best to move forward regarding the current season, with it suggested that Euro 2020 may be pushed back by a year to allow clubs to complete their schedules.

Hopp is fully behind such a notion, and thinks that the tournament may benefit in the long run given the likelihood of the Club World Cup also being called off.