Henry vs De Bruyne: What is the Premier League assist record in a single season?

Henry vs De Bruyne: What is the Premier League assist record in a single season? 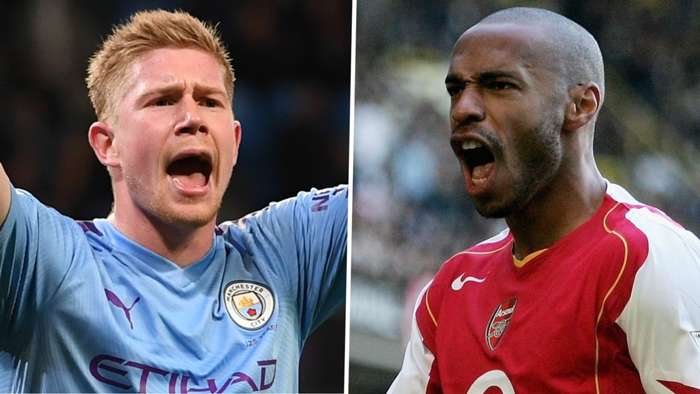 Manchester City talisman Kevin De Bruyne is one of the Premier League's most precise passers of the ball and is particularly decisive when setting up goals for his team-mates.

Former Arsenal striker Thierry Henry holds the record and De Bruyne revealed that he warned the Frenchmanthat he was gunning for the crown of assist king.

"I always joked with Henry in the national team, even at Vincent Kompany’s testimonial this year. I saw him and said 'I’m coming for you this year'," the midfielder said in an interview with The Athletic.

So what exactly is the record and will De Bruyne finally crack it this season? Goal brings you all the details.

The record for most assists in a single Premier League season is 20 and it isheld by Henry, who achieved the landmarkin the 2002-03 campaign.

In all, Henry was involved in 44 Premier League goals that season, having scored 24 himself - though, remarkably, he was beaten to the Golden Boot by Ruud van Nistelrooy, who bagged 25 for Manchester United.

"I hold the record. De Bruynesaid the other day that he wants to beat it," Henry said in a Puma broadcastthis year."But I told him that with those 20 assists, you will have to score 24 goals as well! Not only assists!"

Three players, including De Bruyne, complete the top five with 18 assists in a single season.

He has consistently demonstrated his ability as a playmaker by getting into double figures in the assist charts, registering 16in 2017-18.

Prior to his arrival at Man City, De Bruyne topped the Bundesliga assist charts in 2014-15 with a total of 20 for Wolfsburg, so it is a number he has reached before.

It is interesting to note that Henry is the only striker in the top five, with Ozil, Lampard, De Bruyne and Fabregas all being playmakers whose job is ostensibly creating goals.

The World Cup winner may be Arsenal's all-time record goalscorer with 228 goals (175 in the Premier League), but he has never identified as a classic striker, relating instead to the likes of Ronaldo or George Weah.

“Sometimes I get more pleasure at giving a goal than to score it,” Henry told The Telegraph in 2005.

Ryan Giggs holds the record for most assists in Premier League history. The Manchester United icon set up 162 goals for his Red Devils team-mates during the course of a two-decade-long career.

Next in line after Giggs is Fabregas, who clocked up plenty of assists during his time at Arsenal and Chelsea, though the Spaniard falls over 50 short of Giggs with 111 assists.

Manchester United and Everton hero Wayne Rooney is third in the all-time table forPremier League assistswith 103, just one ahead of Lampard, who laid on 102 goals for his Chelsea and West Ham team-mates.

Dennis Bergkamp completes the top five with 94 assists in his 10 years at Arsenal.