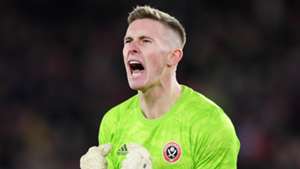 Dean Henderson will be a United player next season, claims Billy Sharp, but it is yet to be determined whether he will be in Manchester or Sheffield.

The highly-rated goalkeeper is currently taking in a second loan spell at Bramall Lane.

He helped the Blades win promotion to the Premier League in 2018-19, before seeing Chris Wilder's side become a surprise package in the top tier this season.

Henderson has earned plenty of plaudits for his performances, with it suggested that he could soon earn the right to nail down England's No.1 berth.

There have also been calls for him to be drafted back into the ranks at Old Trafford over the summer as competition for David de Gea, who has seen costly errors creep back into his game.

Henderson has made no secret of the fact that he intends to become the Red Devils' go-to option between the sticks at some stage.

Transfer talk has, however, been sparked as his path remains blocked at United.

Chelsea and Real Madrid have been credited with holding interest in the confident 22-year-old, but he is paying little attention to such speculation at present.

According to current team-mate Sharp, there are only two options that Henderson will be considering at the end of the season.

The Blades striker told reporters: "We're not in his ear about it, we don't need to be.

"I'm certain he'll be England's No.1 soon. He has to be with his performances, and he wants to be as well."

Wilder would welcome the opportunity to do another deal for Henderson, be that a third loan agreement or a permanent transfer.

In his eyes, a man who has taken in 76 appearances for Sheffield United over the last two seasons has shown himself to be one of the very best in the business.

"He's a confident boy and he's not shy, but he backs it up," said Wilder.

"He has a huge desire to take his game to the very top. He is doing the absolute maximum to be the best he possibly can."

Henderson kept another clean sheet in his most recent outing, with Norwich downed 1-0 to keep the seventh-placed Blades in the hunt for European qualification.