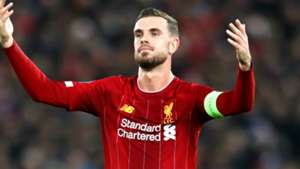 Jordan Henderson's leadership skills are proving to be a big miss for Liverpool, says Phil Thompson, with "complacency" allowed to set in during the 3-0 defeat at Watford.

The Reds saw a 44-game unbeaten run brought to an abrupt halt at Vicarage Road on Saturday.

A rare setback for the Reds came on the back of a number of unconvincing displays since Jurgen Klopp's side returned to action after their winter break.

There is enough quality within the ranks at Anfield to keep grinding results out, with one hand still on the Premier League title, but the injury-enforced absence of captain Henderson is considered to have contributed to a slight dip in collective standards.

Former Reds skipper Thompson told Sky Sports: "The last two games have shown the importance of Jordan Henderson to this side.

"Not only what he brings as a midfield player, but he would have been demanding a lot more from the players on the pitch, talking to them controlling them, and asking more from their performances. He is the leader and has the presence on the pitch so Liverpool are missing him at the minute.

"I think everybody who watched the game [at Watford] could see Liverpool were not at it, and it was complacency.

"It is not having a go - it is just saying that all of these top teams go into these games and are a bit blase about it, especially at this time of year when these clubs at the bottom of the league are fighting for their lives.

"Since the winter break, Liverpool have not been great at all. The words on the lips of a lot of Liverpool fans was that they have been waiting for this to happen.

"Against Norwich, it was not great, but they won. The game against West Ham was not good, but they just won again.

"Maybe a lot of fans felt they got away with it in those games, but then you revert to the fact that this is how teams win the league, winning when you are not playing well. You are always worried that there is one of those results around the corner."

Having got a Premier League loss out of their system, to go with the 1-0 reversal suffered against Atletico Madrid in the first leg of their Champions League last-16 encounter, Liverpool will be looking to establish momentum again when they face Chelsea in an FA Cup fifth-round tie on Tuesday.